I arrived down the lake at my normal time to find 4 cars in the car park, which isn’t a bad number. I parked up and took a walk about. I worked out an area of the lake which was pretty much left alone and would give me a fair chance of a carp. The weather was pretty bleak, there was a NE wind blowing,  which comes down the lake and you can’t really hide from that. I also didn’t want to set my brolly up as I need to keep an eye on the far margins, they’d produced the odd carp recently.

I set up my rods and flicked one to my left and the other one to my right along the margins. I scattered some 12mm Catalyst boilies with 8mm Catalyst pellets soaked in the food dip over each hook bait. One rod I used a pva bag as I wasn’t sure if the pads had stated to shoot or not.

After spotting a carp show just before noon, I was soon around the other side of the lake and set up with two 12mm Catalyst pop ups over a handful of 8mm Catalyst pellets.

Hopefully, this will produce a fish within the next hour or so.

I was getting a few heavy liners again and was also getting worried that I may spook any carp out of the swim; as this has happened 3 times now. I think it may be time to carry my captive back leads with me,  I’m not a fan of the running down the line sort, as this has resulted in a few fish lost over the years.

Just after 1230, the right hand rod was away and this was no way a small carp. After getting it back out from under the overhanging trees, it was away into open water and on a mission. As it had been so long since I’ve hooked a half decent fish, I was playing it a bit to carefully than was necessary. It was finally under control after what felt like a lifetime and a few scary moments, it was then finally in the net and I could breathe again! 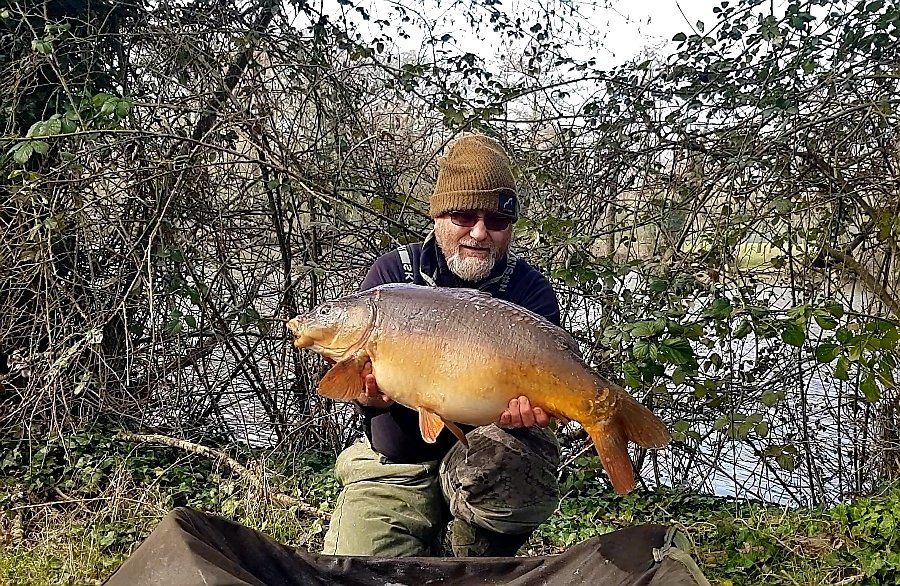 I was over the moon.  It had been some months since a stunning carp was in my hands.

I soon had the rods out again, I very nearly moved, but I was interested to see if this was a one off, or do they move along these margins?

It’s absolutely lovely now with the sun out.  I was hoping that another carp would come along this margin and find my hook baits, as this area must be the warmest part of the lake.  There’s still a hope as I have just over an hour to go.

Unfortunately, that was that.

Until next time
Stay safe
Richard

I would like to give a brief snap shot of my life and introduce myself; My name is Richard Handel and was born in 1965 in Suffolk. I have worked as a UK Operation & Intermodule Manager for a shipping company. I live in Hampshire now and am married with 2 young children, both girls so I am a bit outnumbered even the cat is a girl! I have been fishing since I was about 7 years old. I started on small local rivers in Suffolk, then moved onto gravel pits and then carp fishing. My personal best is a 39.08 mirror, over recent years I have started river fishing again, on the Hampshire Avon, this is a nice break from the carp lakes. My life has turned a big corner this year, the company I was working for relocated their Operation centre to Estonia. I was offered a job at the head office in London. This would have meant a 5 day commute and working in Stratford. As a family, we did not fancy this, as I would hardly spend any time with the children (and the Mrs). So after 22.5 years, I was given a nice redundancy package and with my wife is working full time. I became the house husband. This has meant a complete turn around in my fishing, as I can pick and choose when I go. I have found a splendid new syndicate to fish this year, which includes 5 lakes and some 8 miles of river with only 150 members. It's an amazing change to the way I am able to fish. I am now trying to start my own tackle business and make a bit of a name for myself in the world of fishing, as I have retired from real work. Richard
View all posts by richardhandel →
This entry was posted in Asso Fishing Line, Carp fishing, Grizzyman Clothing, Pink Pepper Squid, Scruffy Carp Leads, Spotted Fin and tagged #SpottedFin #assofishingline #grizzymanclothing #scuffsleads #hampshirecarpfishing #deepersonaruk. Bookmark the permalink.