Memories of an old fisherman 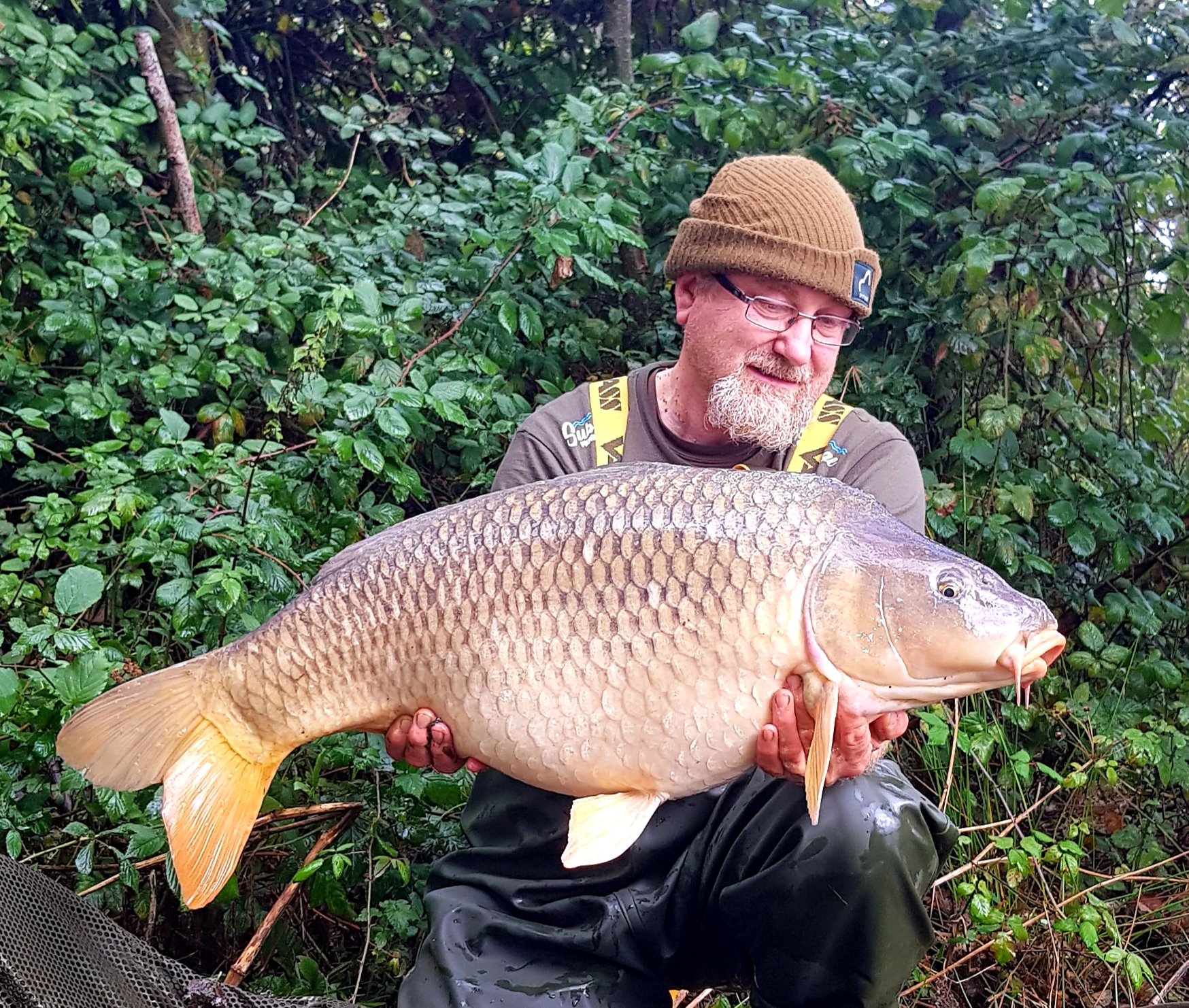 Then I moved on to Weybread Middle Pit for a year or two.

Then back to Barham Pits for a year, until they, unfortunately, had a fish kill over the closed season and that was it.

It was then I ended up on Weybread again and stuck there until I moved down south in 1996. 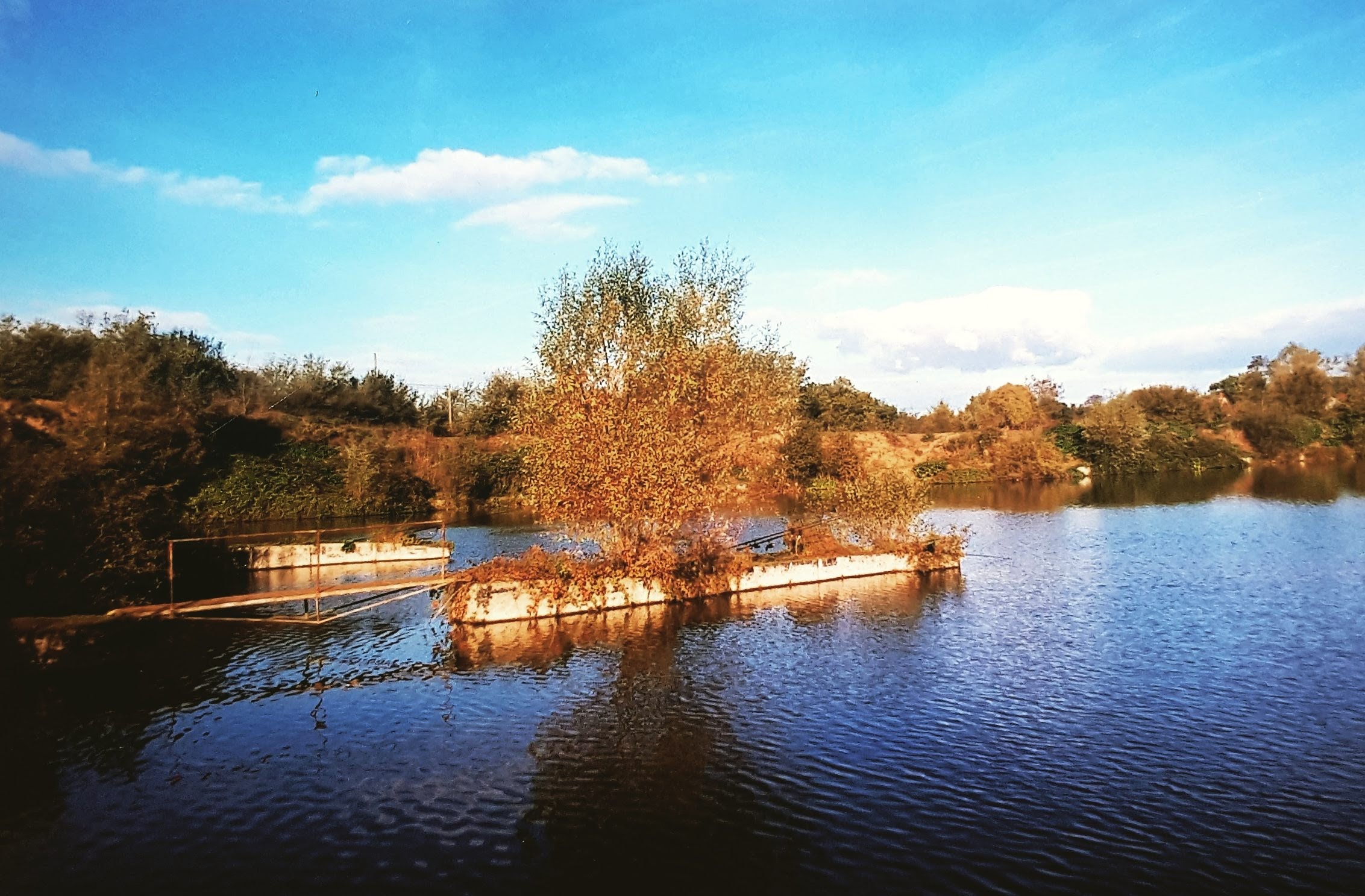 I did fish the odd place in between for a short period of time but it never gave me the searching for the ‘unknown’ feeling, I’d become accustomed to. 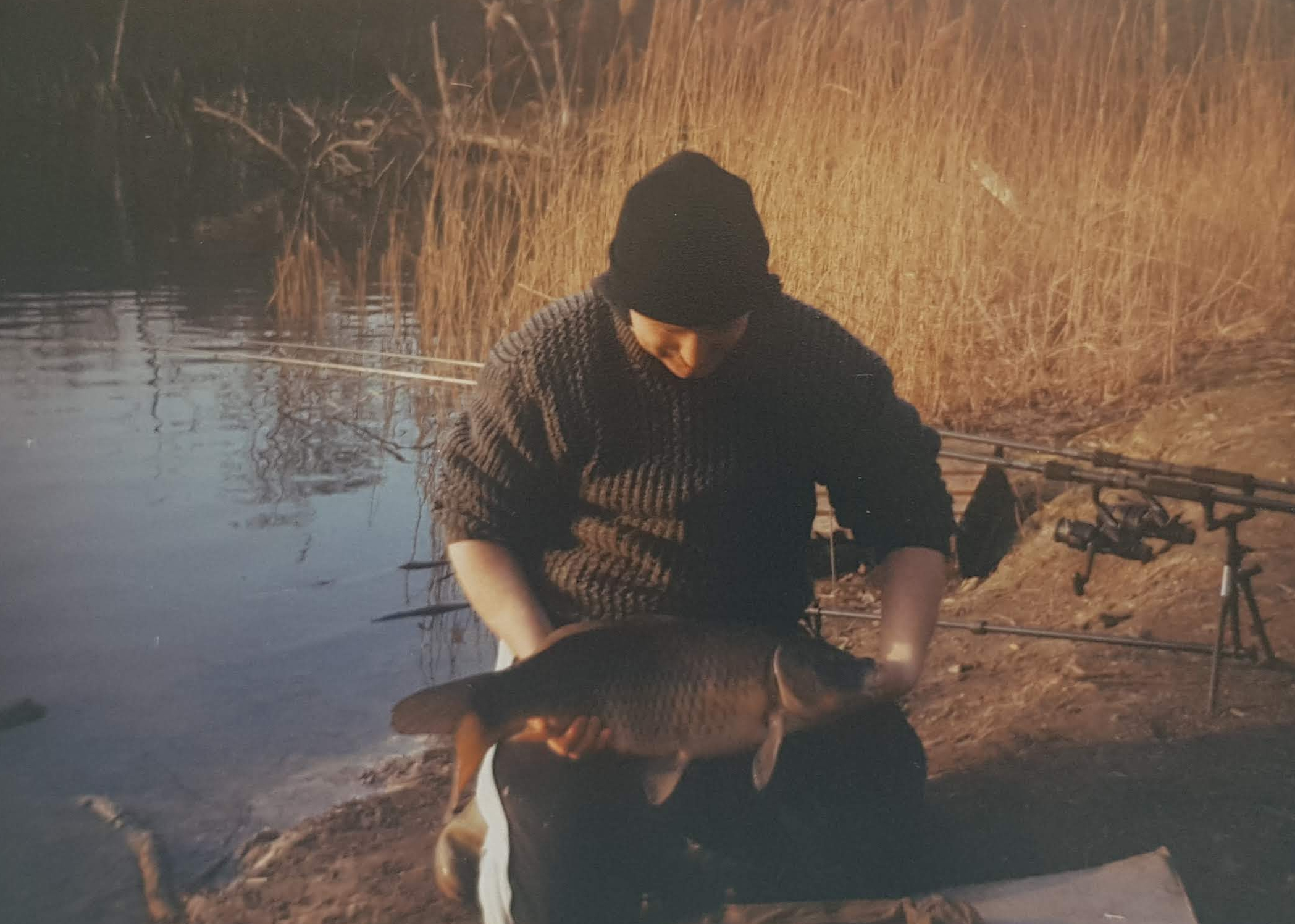 This was in the 90’s on Weybread Bottle Pit with a wave lock brolly and a nash overwrap.  It also had a full-on double burner and grill, wooden bivvy table (not a modern invention!), the bedchair was one of the first comfortable adjustable Fox ones and the small screen in the middle is my TV.  Even back then I would pass the time away by watching stuff and reading books

KJB rod pod and Shimano bait runners, optonics and Fox Swingers, which had made so they would light upon a take (again, not a modern invention).

Winter fishing was fun.  Wave lock brolly, Nash canvas bivvy, which was an awesome bit of kit.  If you are wondering where the rods are, they are down the bottom as per the photo above and you had to tun for your rods – well walk.  If you fished any swims along the high bank opposite (unless it was the two with a walkway out into the lake), you bivvy up at the top and needed 20m extension leads for your sounder box.

Way back in the beginning – 1984 Weybread Pits, before I couldn’t afford much, I would sleep on the floor in a sail bag and a sheet over, the plastic held down by whatever I could find I used.  Luckily no photographs of them.  I never used a brolly unless it rained and you had to put a bin bag over the end, to stop yourself getting wet.  You will note the non matching rods, which was the norm for the first few years.

Getting a bit more modern, matching rods, buzzer, and reels camped out for a week on Barham D pit – somethings never change.  I even did week seasons; once I had a carp and I was Tench fishing!  I’ve come to the conclusion that I love being outside as much as possible. 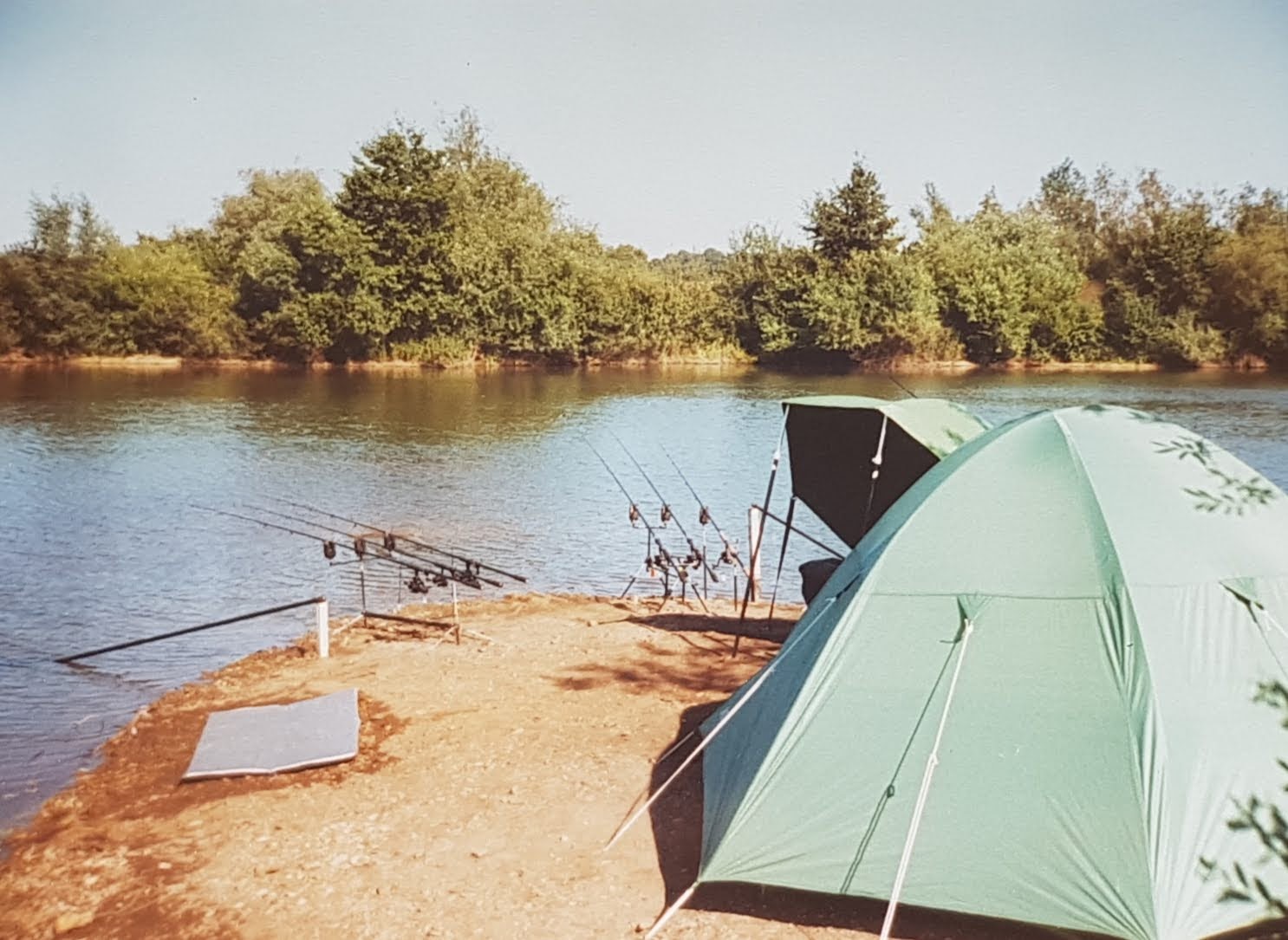 And my up to date set up Aqua M3 Compact, Fox flatline Bedcahire, and a 5 season sleeping bag, out in all weather over the Winter months.  I must say, I have noticed that there are less times where the lakes freeze up.  We have certainly moved on and for the better, I personally feel.

I fished this lake twice over the years – with a large gap in between.  I’ve no photos of the first time around, but the lake was absolutely stunning. It still was when I arrived back the second time – until the big cut back, which was quite dramatic and put a lot of anglers off.  But not me!  This was quite fortunate as the carp didn’t know any different, it was great fishing there.  You could walk around, place your bait on the perfect spot and walk back to your rods. 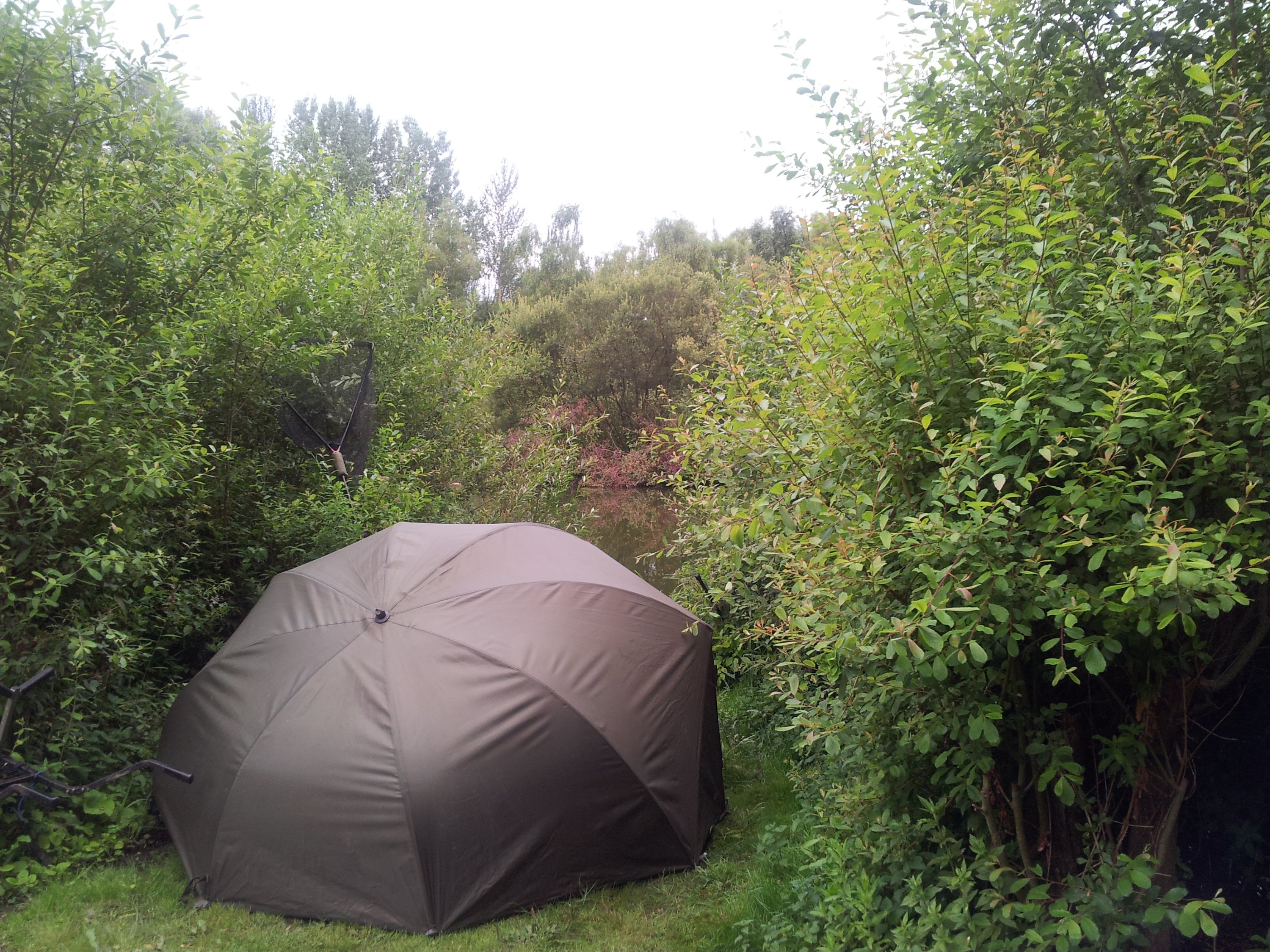 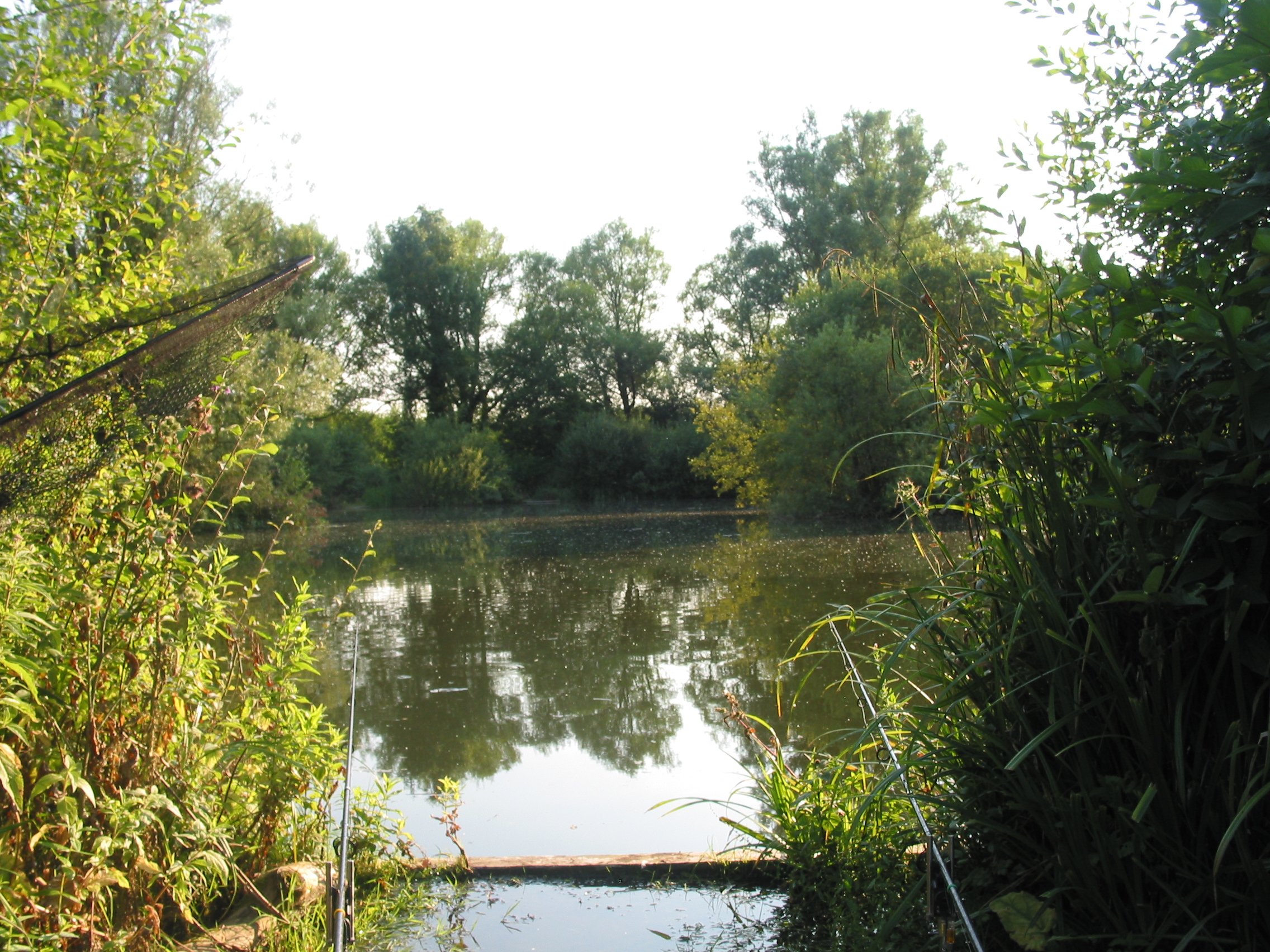 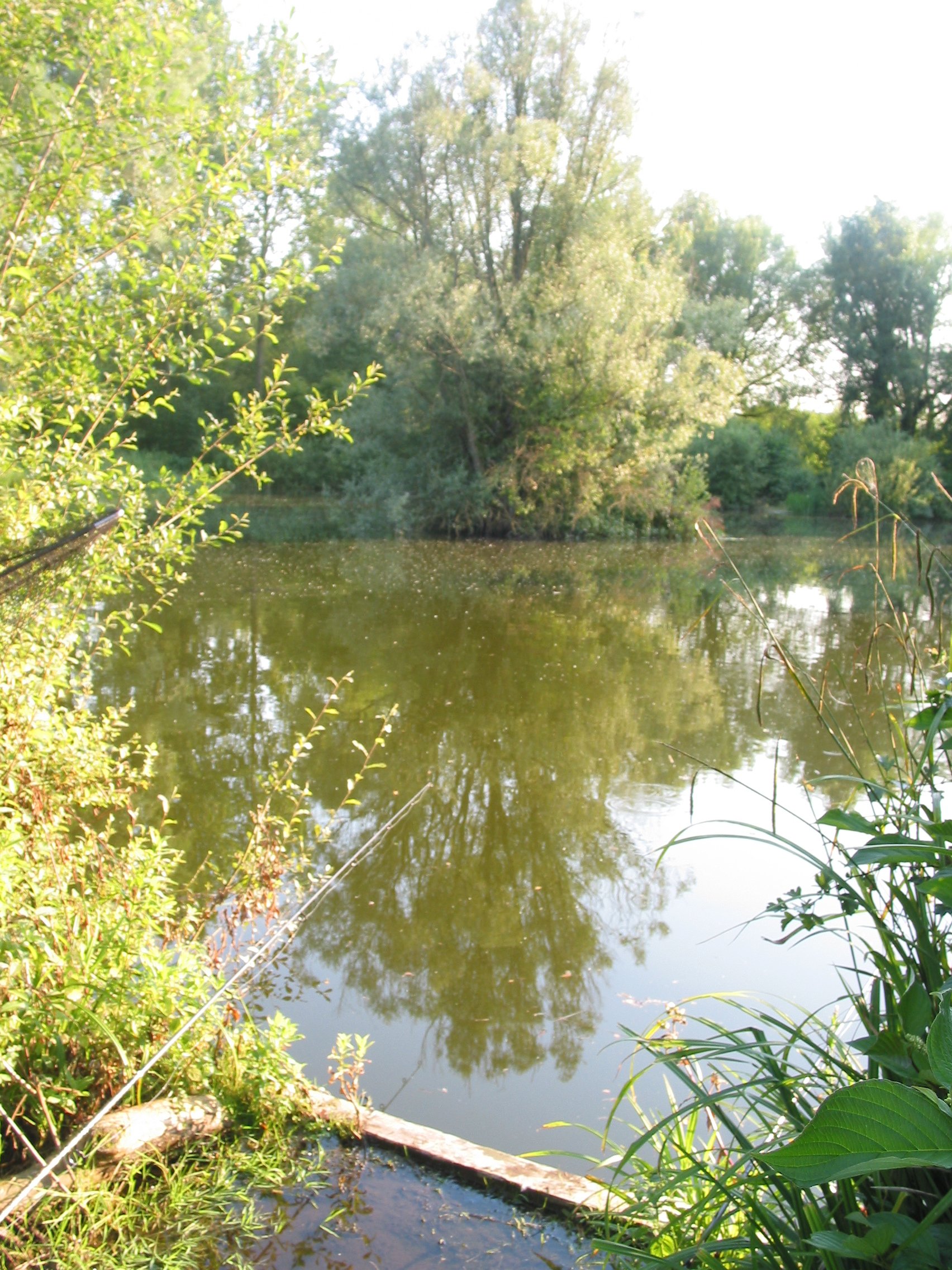 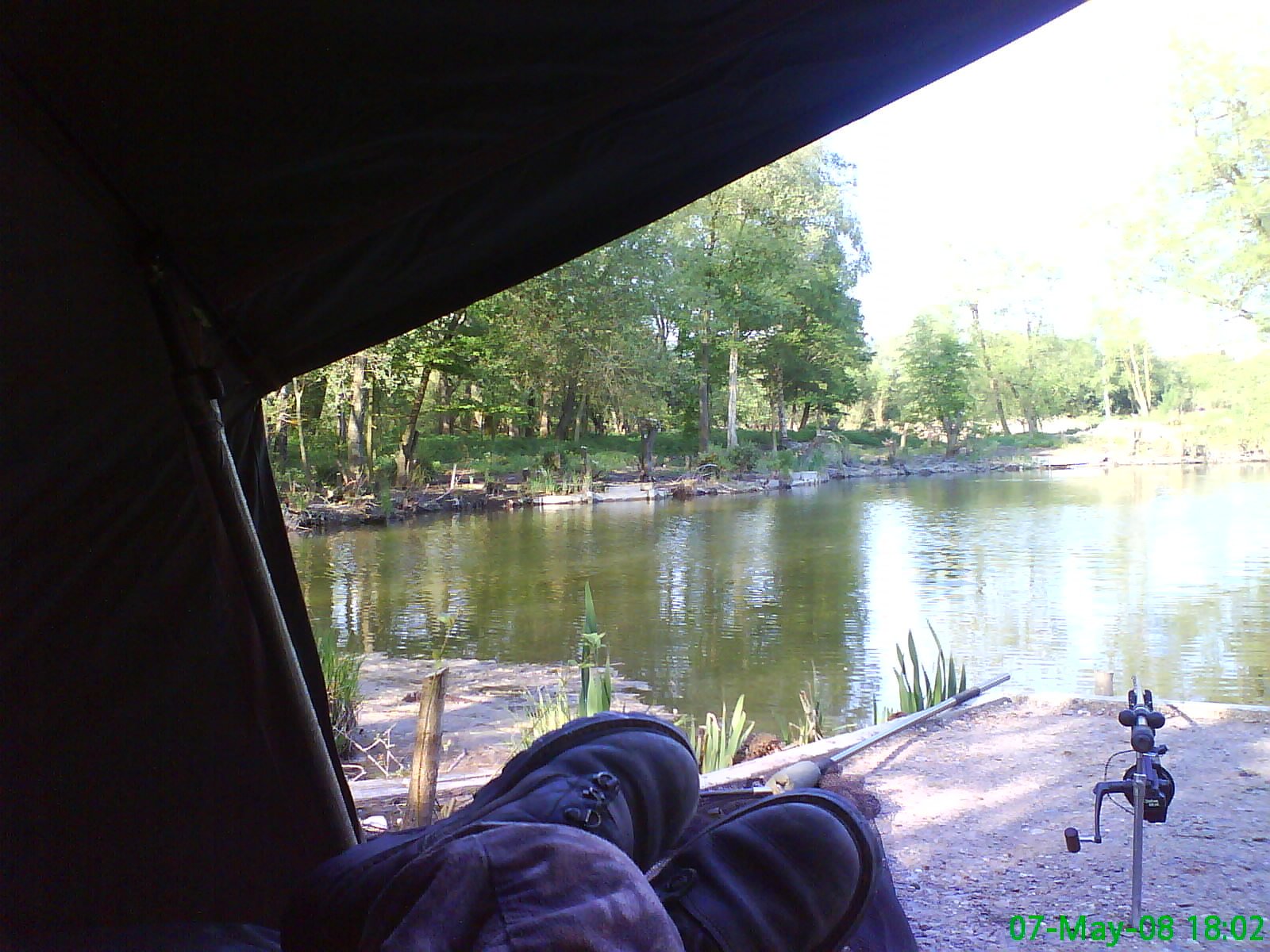 The vegetation started to grow back and the anglers returned.  I moved on to Kingham next door.  Unfortunately, it got a bit silly with one angler arrive early and stick their bucket and chairs in swim to reserve swims for his mate’s, who would arrive 3 or 4 hrs later. This was the time that I headed off to fish a lovely syndicate on the Hampshire Avon for 6 years, where I hardly ever came across another angler.

I first joined here about 1999 and stayed a member until last year.  I only ever fished it properly over a winter in between the interim syndicate starting and the full-on syndicate where I’m currently a member of.  I only ever fished there as a place to get away from the crowds.  It was situated up a 1/2 mile path through a wood, which could get very muddy, this put anglers off.  It was very easy in the beginning but unfortunately, it had a fish kill and the restocked carp behaved completely differently. 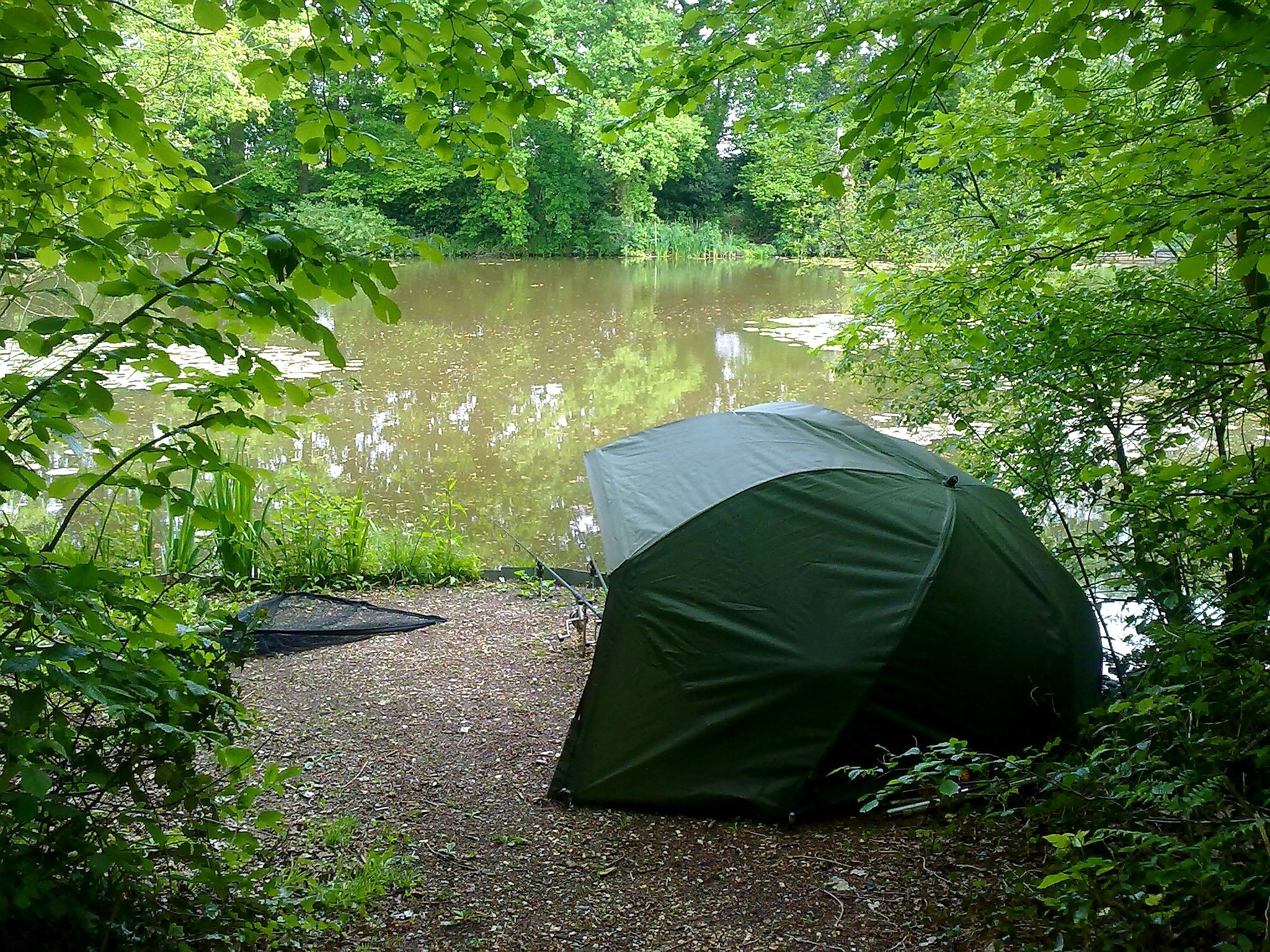 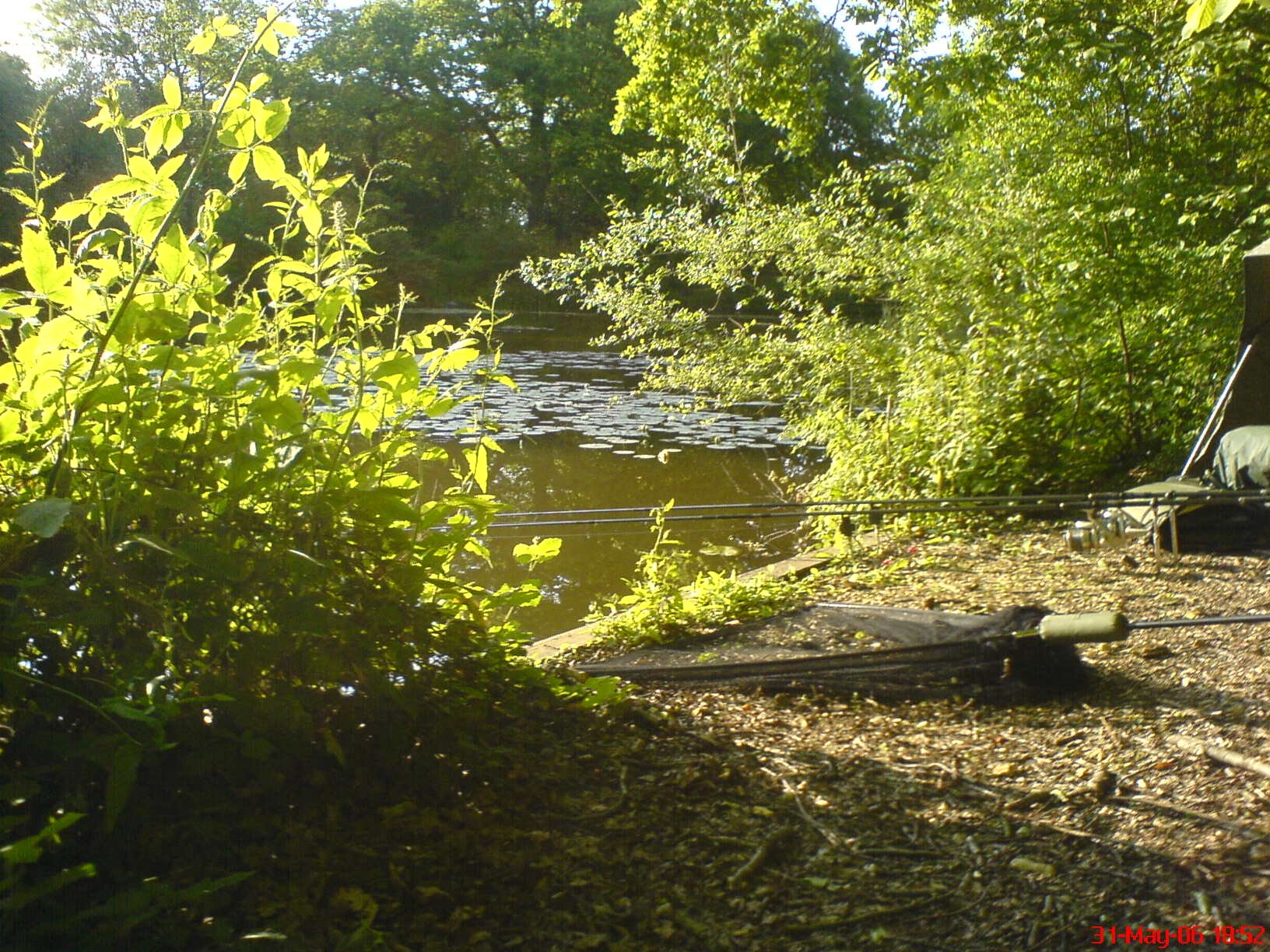 It was full of lilly pads and a large reed bed at one end with a dam wall and was just so peaceful and tranquil fishing there.

This lake is situated on the edge of the town and is also a boating lake.  It’s 4 ft deep most of the way out, in the middle on the depths of winter and as the levels drop, you have to stick your rod tips down and into the slit to completely avoid the boats and the swimmers, ducks, etc picking up your line as they go by. 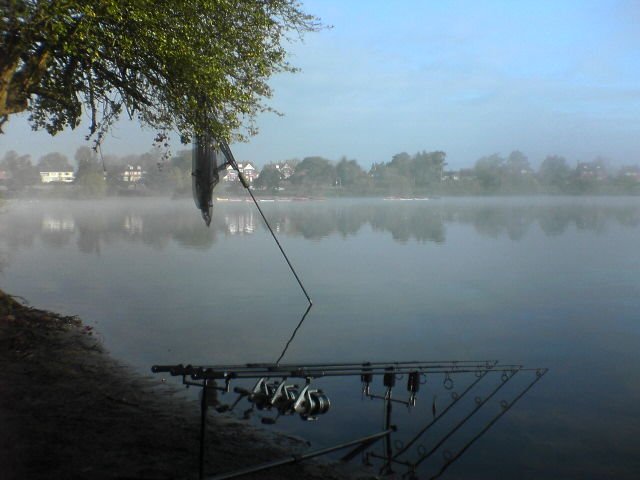 Unfortunately, I don’t have a single photograph of any carp that I had, I’ve lost them.

As you can see, the water level could drop right down, and instead of bivvying up on the bank, you could set up in the margins.  There where plenty of deeper channels about and I had 5 20s from where the furthest duck was in the below photo. 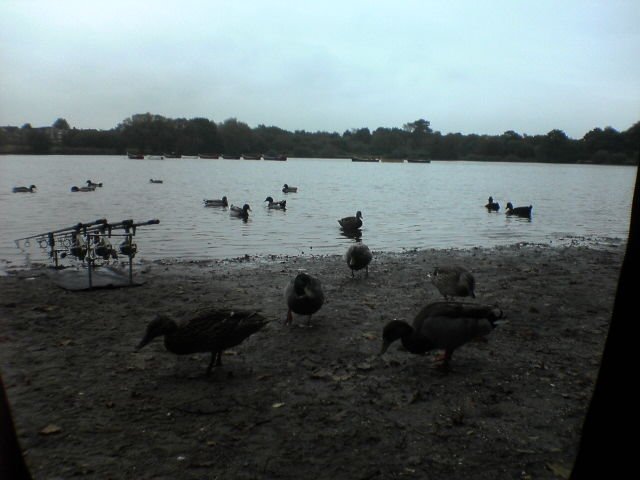 When I  fished here, there was a good head of carp to the upper 30’s and plenty of bream to keep occupied.  You could sit on the park benches and watch the world go by, get yourself an ice cream from the shop.  Unfortunately, there was a fish kill some years ago, but I believe it’s getting back to its former glory. 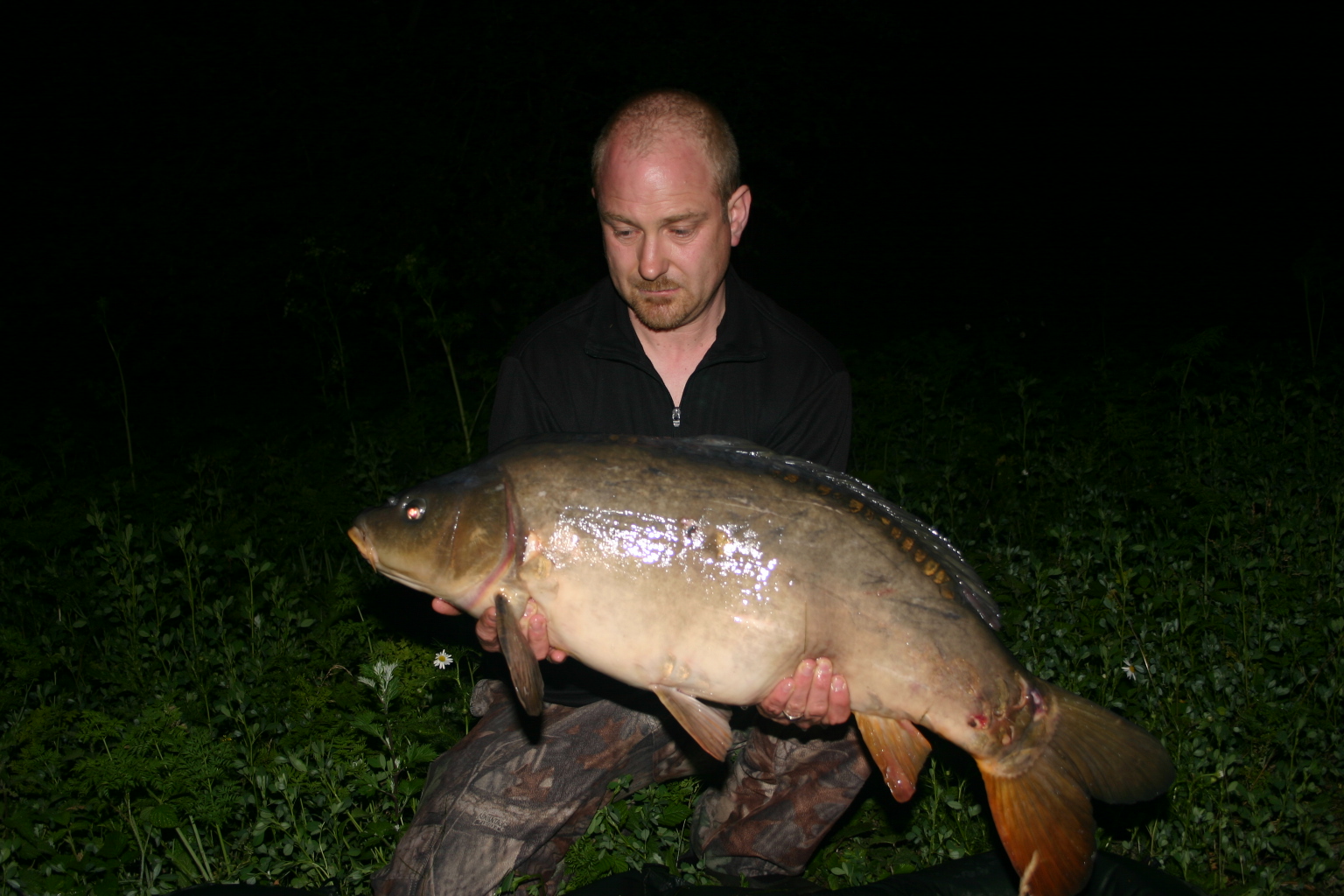 In the last few years I’ve been on a wonderful syndicate been Ringwood, with only 100 members and 3 carp lakes and 8 miles of the Hampshire Avon to fish.