I am out for three nights this week (which is very nice indeed).  I am fishing on the back of the wind, even with the warm weather we have been having.  I still feel there is still a bit of a chill in the wind.

The swim I am in gives me access to the right margins, this is full of overhanging trees and the margins are very deep here, some are 8ft .

Two rod’s have been placed along here, my third rod is on a very nice clear bar, with weed on each side.

I have spomded out and catapulted out a smallish amount of bait over all areas I have chosen for the first night and I will see what happens.

The first night past with no activity, other than the odd beep.  The temperature had dropped a lot and there was thick fog.  It must have arrived at some time in the night and finally burnt off late morning. 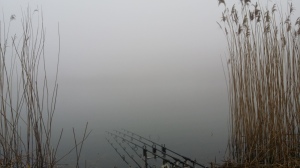 In the afternoon (when the fog had burnt off),  I had a walk around the lake and was very pleased to find a fair few fish sunning themselves.  Also, the water temperature had risen from 8 degrees to a tiny bit under 10 degrees (c), not that the carp wouldn’t feed when the temperature is as low as 8 degrees, it just lifts the anglers confidence level up.  I am hoping tonight should produce a fish or two, as the night temperature would not be dropping so much.

Now that was a big shock.  I was hoping for some action last night and especially with all the movement in the day time.  Last night was not what I expected…. I had a great night’s sleep with no so much as a bleep!  There was less fog this morning, the sun was already out and by mid morning I had seen a fish move along the bar.  This was a good sign and I was hopeful, this weather would turn them on a bit more.

Last night was my best chance of a fish, the night temperature did not drop below 8 degrees.  Around 8 am the wind picked up and a strong S/W wind blew a big rain storm though.  Dispute all this, I had a three night blank.  I did have a very enjoyable trip out fishing and it was nice to relax and not think about work.