The school holiday’s are over and a fantastic time away camping in Wales had been had.  I have got the fishing hat back on again.  It’s only about 10 days away from the river’s being open again and a new adventure this year.  I am going to be putting a lot of effort into catch some Hampshire Avon carp. 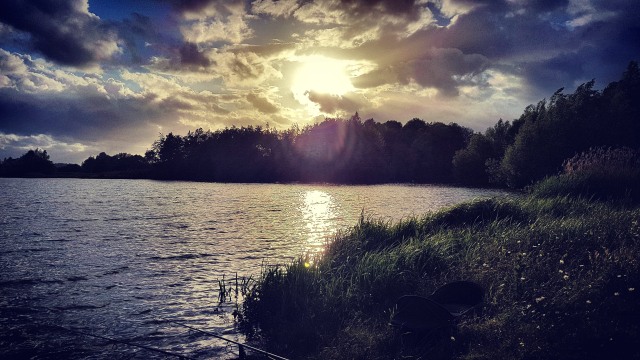 With a good old storm blowing through over the past couple of days (the winds are still gusting up to 30 mph), I felt I just had to be on the windward bank, despite the problem of getting the brolly up, it had to be worth the effort.

With the brolly facing away from the lake, I was set up.  I had a nice view up into the New Forest.

The rod were placed on a couple of my new spots – with my normal bag set up and a few baits chucked out in the area, to draw the fish in.

The night was mostly peaceful, other than the wind, I was lying in the my bag watching the sun come up over the forest.

The right-hand rod belted off, as they do in this lake due to the shallowness.  I got the fish into the back quite easily and I was thinking it was a very low double.  This was until it was under the rod tip and burst in to life and proceeded to give me a good run around until it was finally in the net.

It was a bit fresh out this morning.

I would like to give a brief snap shot of my life and introduce myself; My name is Richard Handel and was born in 1965 in Suffolk. I have worked as a UK Operation & Intermodule Manager for a shipping company. I live in Hampshire now and am married with 2 young children, both girls so I am a bit outnumbered even the cat is a girl! I have been fishing since I was about 7 years old. I started on small local rivers in Suffolk, then moved onto gravel pits and then carp fishing. My personal best is a 39.08 mirror, over recent years I have started river fishing again, on the Hampshire Avon, this is a nice break from the carp lakes. My life has turned a big corner this year, the company I was working for relocated their Operation centre to Estonia. I was offered a job at the head office in London. This would have meant a 5 day commute and working in Stratford. As a family, we did not fancy this, as I would hardly spend any time with the children (and the Mrs). So after 22.5 years, I was given a nice redundancy package and with my wife is working full time. I became the house husband. This has meant a complete turn around in my fishing, as I can pick and choose when I go. I have found a splendid new syndicate to fish this year, which includes 5 lakes and some 8 miles of river with only 150 members. It's an amazing change to the way I am able to fish. I am now trying to start my own tackle business and make a bit of a name for myself in the world of fishing, as I have retired from real work. Richard
View all posts by richardhandel →
This entry was posted in Asso Fishing Line, Brollys, Carp fishing, Carp Tackle Supplies, richard handel, Spotted Fin, The Catalyst. Bookmark the permalink.