Posted on November 26, 2016 by richardhandel

This trip is going to be a bit wet and windy, as there is a good storm pushing though tonight.  This means plenty of wind and rain to stir the fish up. 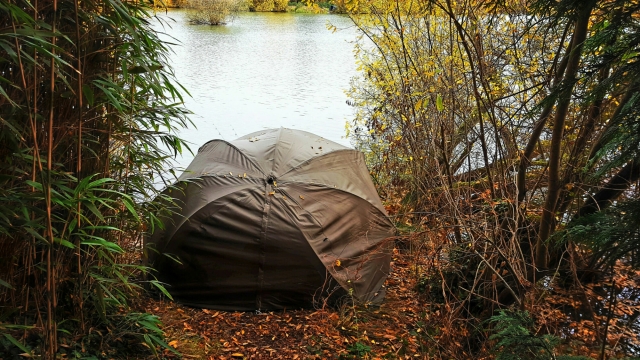 The swim selection was a bit limited, a few other members had the same idea.  The swim I had fished during the week was available and I was very confident that the fish would still be in the area. 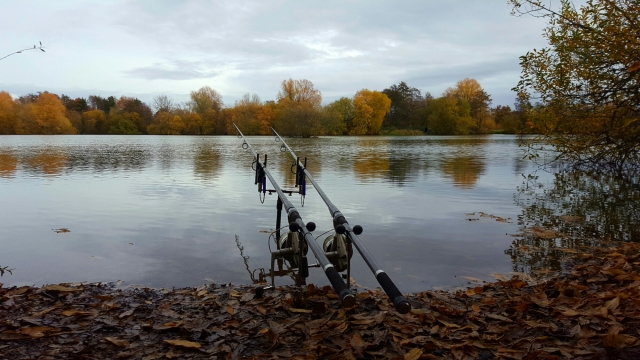 This would also give me a bit of shelter from the weather.  Both rods where going to be fished in the margins, for the late morning and afternoon.  The bags were filled with my stix & bag mix and a Natural Pop Ups.

The right hand rod would stay under this bush, with a nice load of Spotted Fin G02 groundbait and chopped Catalyst boilies.  The other rod would be pushed out from the margins, as the chance of getting a fish in at night from there was zero (even with my rod butts in the door way), when the storm arrived with the wind and waves!

And after the rain, it nearly got on the door.

The levels certainly came up a bit last night.  First real Autumn storm to get the leaves blown out of the trees and that certainly did happen last night. 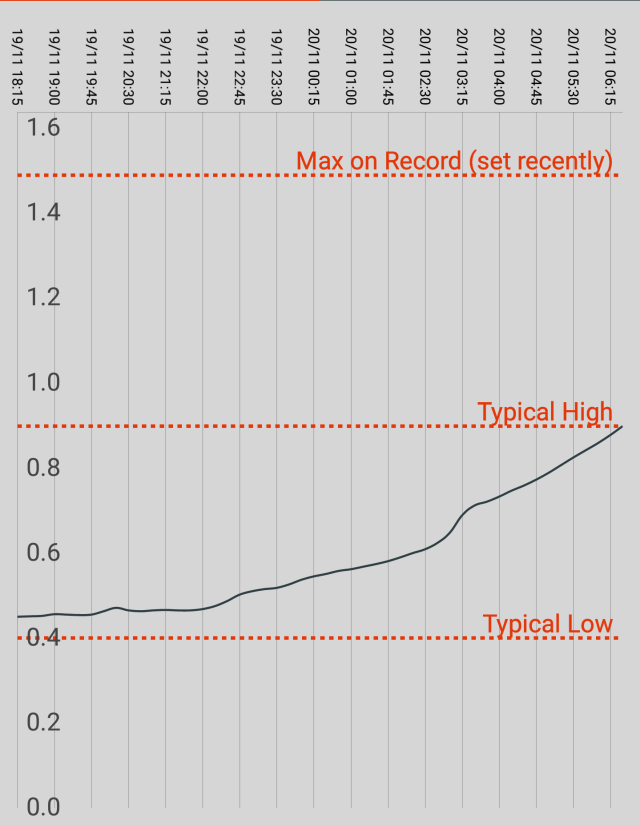 A bit of a morning glow coming from the distance.

Unfortunately, despite my best efforts, I didn’t get any fish – which was a shame.

I would like to give a brief snap shot of my life and introduce myself; My name is Richard Handel and was born in 1965 in Suffolk. I have worked as a UK Operation & Intermodule Manager for a shipping company. I live in Hampshire now and am married with 2 young children, both girls so I am a bit outnumbered even the cat is a girl! I have been fishing since I was about 7 years old. I started on small local rivers in Suffolk, then moved onto gravel pits and then carp fishing. My personal best is a 39.08 mirror, over recent years I have started river fishing again, on the Hampshire Avon, this is a nice break from the carp lakes. My life has turned a big corner this year, the company I was working for relocated their Operation centre to Estonia. I was offered a job at the head office in London. This would have meant a 5 day commute and working in Stratford. As a family, we did not fancy this, as I would hardly spend any time with the children (and the Mrs). So after 22.5 years, I was given a nice redundancy package and with my wife is working full time. I became the house husband. This has meant a complete turn around in my fishing, as I can pick and choose when I go. I have found a splendid new syndicate to fish this year, which includes 5 lakes and some 8 miles of river with only 150 members. It's an amazing change to the way I am able to fish. I am now trying to start my own tackle business and make a bit of a name for myself in the world of fishing, as I have retired from real work. Richard
View all posts by richardhandel →
This entry was posted in Asso Fishing Line, big pits, Brollys, carp, Carp fishing, Carp Tackle Supplies, CENTURY RODS, Course Fishing, Fishing, Fishspy, Florocarbon Line, Food, lake fishing, photography, Pop Ups, richard handel, ridgemonkey, Spotted Fin, Steve Neville buzzers, Tf Gear Hardcore Brolly, The Catalyst. Bookmark the permalink.