I am on Holbrook Mill Pond for a social for the next couple of nights and after a good walk around (and a brew in the club house), we settled for the deeper end of the lake on a swim that I have not fished before.

With the lake looking stunning and fish everywhere, it was hard to pick the perfect swims. 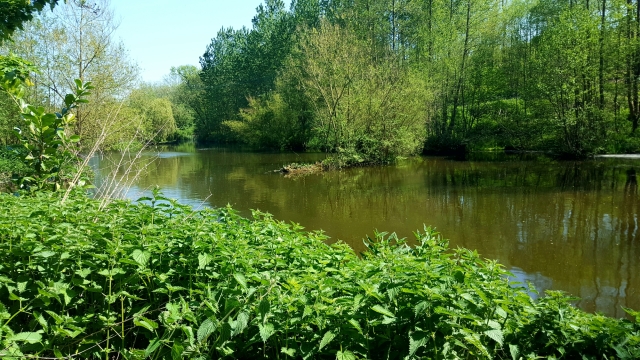 But this end just felt more appealing to me.

My right-hand rod was flicked just of an snaggy area’s with a nice scum line. 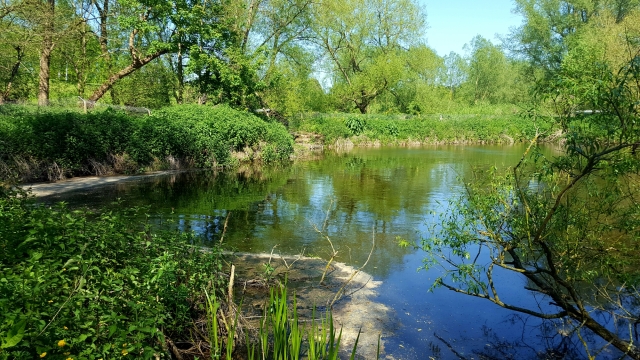 The middle rod was over by the corner of and island as its an interception route.

And the third rod, was on the opposite side of the entrance to the end of the lake.

Drop just of the end of the bank. 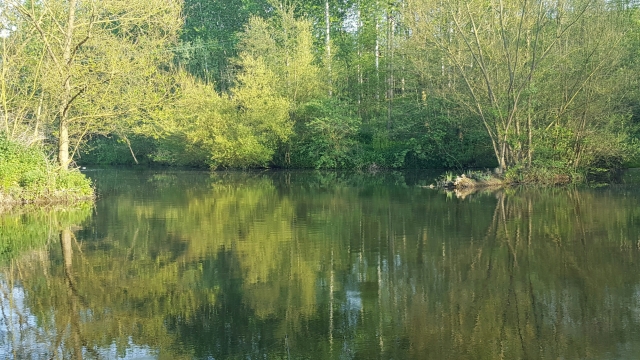 The gap I am fishing has been filled with spod mix and a mix of 14/18mm boilies with 18mm Wafters fish over the top.  The snaggy rod has had the same treatment and hopefully the fish who are moving around the area, will be happy to go down and feed, as the nice hot day temperature will drop tonight. 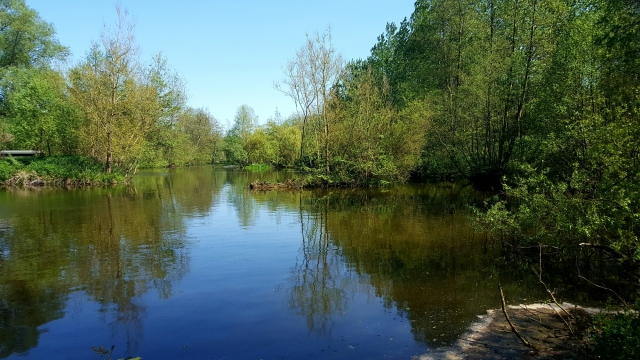 Just stunning surroundings.
At around 1930, the right-hand rod was off and attached to a very hard fighting Holbrook carp.  It was not playing ball and held its ground, trying to get into the snags, until the hook pulled and the fish was free.

First first night resulted in a hook pull for me and a couple for Rob.  Not quite what I was hoping for, but a start I suppose, hopefully today will bring some carp my way. 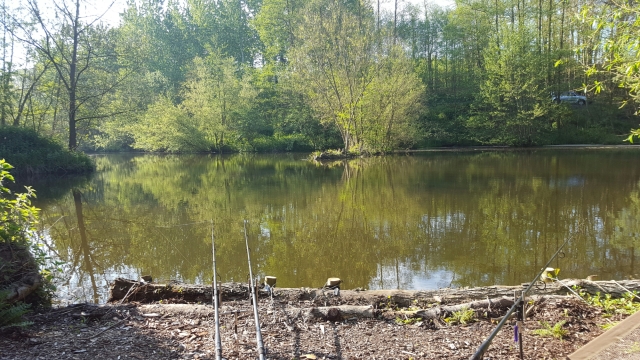 The morning was uneventful, however as the wind picked up, pushing the scum down my end of the lake and the fish started to arrive.  By early afternoon I was feeling quite confident of a take this afternoon.  At around 2 pm, I was into my first hard fighting Holbrook fish, around the 15 lb mark. 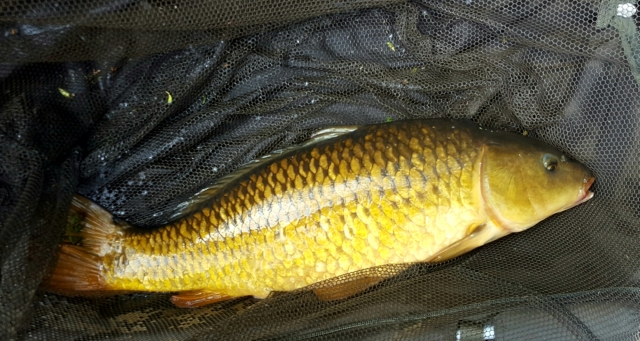 A quick photo on the mat and she was safely returned.  I recast this rod and sat back for a couple of hours, until the right hand rod was off again and the same thing happen as the previous night, yep another hook pull.  Not Funny.

I was up first thing the next morning, after a very uneventful night, these fish are clearly not down here at night, however very much in the daytime.

With this in mind and a clear sky and the sun warming up the day.

I put some more bait out in the area’s I had observed the fish patrolling the day before.  Also flicked my baits on the spots with fresh washed out pop up on, sat back and had a brew.  Unfortunately, the weather changed and the wind picked up and the sun vanished.

I spotted some bubbling over one of the areas I was fishing at night.  With that I reeled in one of my rod’s, placed the bait over the top gently and walked back to my swim.  Within a couple of hours, the rod was away and attached to a very unhappy Holbrook Common.

I was very hopefully that I may get another fish.  However, this was the only take of the day.

With the night coming in, I placed my baits back on the deeper water as a cold night was forecast. 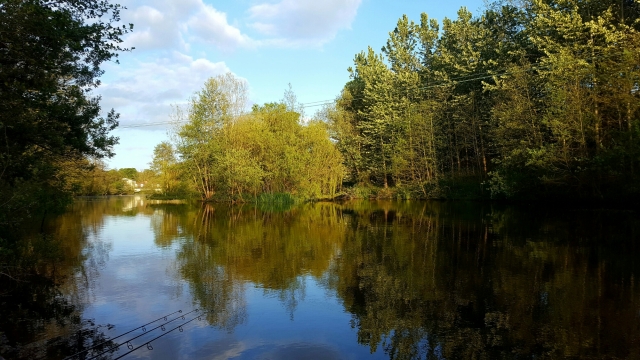 A few down the lake and in the distance you can see the mill house.

The last night turned out the same as before with not a sign of Mr Carp and that was the end of my 3 night social.  It was very enjoyable and I can’t wait to come back soon.

Until next time
Richard

I would like to give a brief snap shot of my life and introduce myself; My name is Richard Handel and was born in 1965 in Suffolk. I have worked as a UK Operation & Intermodule Manager for a shipping company. I live in Hampshire now and am married with 2 young children, both girls so I am a bit outnumbered even the cat is a girl! I have been fishing since I was about 7 years old. I started on small local rivers in Suffolk, then moved onto gravel pits and then carp fishing. My personal best is a 39.08 mirror, over recent years I have started river fishing again, on the Hampshire Avon, this is a nice break from the carp lakes. My life has turned a big corner this year, the company I was working for relocated their Operation centre to Estonia. I was offered a job at the head office in London. This would have meant a 5 day commute and working in Stratford. As a family, we did not fancy this, as I would hardly spend any time with the children (and the Mrs). So after 22.5 years, I was given a nice redundancy package and with my wife is working full time. I became the house husband. This has meant a complete turn around in my fishing, as I can pick and choose when I go. I have found a splendid new syndicate to fish this year, which includes 5 lakes and some 8 miles of river with only 150 members. It's an amazing change to the way I am able to fish. I am now trying to start my own tackle business and make a bit of a name for myself in the world of fishing, as I have retired from real work. Richard
View all posts by richardhandel →
This entry was posted in 360 rig, Asso Fishing Line, carp, Carp fishing, Carp Tackle Supplies, CENTURY RODS, CHILLI HEMP, Cooking, Course Fishing, Defiant MPS, Fishing, Fishspy, Fishtec, Florocarbon Line, Godman Angling PVA, godman pva, Holbook, Holbrook Mill Pond, katran, lake fishing, photography, Poloni Boilies, Pop Ups, richard handel, ridgemonkey, Rob Nunn, solu-ties, SP RODS, Steve Neville buzzers, summit tackle, Syndicate Fishing, Tf Gear, Tf Gear DL Reels, versacast and tagged #richardhandel #photography #carpfishing #TeamBaitTech #assofishingline #fishtec #summittackle #godmanangling #katranuk #carptacklesupplies. Bookmark the permalink.