Posted on December 8, 2021 by richardhandel

I’ve been very lucky again this week, (actually extremely lucky) and I’ve got a very understanding wife and kids. I’m down the lake for three nights this week and it’s only Wednesday! It was a complete stroke of luck, the wife is working from home one evening and then given the following afternoon off. The weather conditions are positively balmy compared to last week, so I grabbed at this opportunity and got down the lake. I was very surprised to only see three-day anglers about and my number one choice free! This swim is just my kind of swim and I didn’t consider anywhere else. It commands so much water unless you are stupid enough to fish long range out of any of the others. That’s simply putting the carp’s safety at risk and unacceptable.

After my last trip, I was desperately trying to avoid the silkweed. I quickly got the rods out and lead about in a different area and a lot further out. I had seen a few possibilities of carp and it had to be worth looking into. Both rods can back clean, I left my old rigs on to aid me in picking up any weed, as they came back clean, I clipped them both up, took note of the horizon makers, and went back to the car to collect the rest of the kit. My next job was to find out the number of wraps and get some bait spread about out there. I like to do this to get the carp hunting and moving for their food, this makes them expend energy which will need to be replaced.

After the silkweed, last week, I decided to put pop-ups on and hopefully avoid it this time. I’m sure it was only on the reel in that it picked up the weed. You get this nagging feeling about this and you just have to combat that with a change of tactics.

Both rods are on the same spot until noontime tomorrow if I’m still blanking and I’ve not really seen any carp. There will be a change on the cards for one or both of my rods. I’m not dismissing this idea of putting a bait quite close in, as it’s where I’ve caught in the past. However, there’s quite a bit of weed about and I really need more time to get my bait perfectly positioned, so little be of prep for future trips is needed.

The rods were silent overnight but the carp were a little more active, mostly along the far margins, with the exception of a lump that crashed out about 3 times and woke me up. Despite my best efforts I’m still not 100% sure of its location, this is a bit of a shame, I stayed up for a couple of hours around 2 am listening for it to happen again, but alas it didn’t. I think the fog really didn’t help. On the plus side of this, I certainly heard way more carp last night than I did the previous trip. This is never a bad thing, I will give it until noontime, then get the Deeper sonar out and search about amongst the weedy areas for a clear spot.

I had located an area just away from the silkweed and had successfully not picked anything up on my rig after a good five casts to check over the spot.

I opted for the left-hand side of the weed, it was a hard choice as to which one of the range rods I reeled in. If it was definitely clear of weed and as they were pretty much on top of each other, I was hoping to leave the other rod alone. This does seem to work these days. It was the right-hand rod I reeled in as it made more sense for it to be that one. A new Pink Pepper Squid pop up was put on, I was still being mindful of the weed, so a few spombs were put out on the spot and we were all set for my second night.

Just after 3 pm, the left rod gave a couple of bleeps, pulled up to the buzzer and the bobbin dropped back down. I was into a bream, lucky me!

Definitely nothing wrong with those hook baits and a least the bream fancied a feed. Hopefully, it’s only a matter of time before a carp comes my way.

With a fresh bait on and the rod back out there, I’m feeling very confident. There was a pressure drop and the wind was picking up from the South West overnight, it’s certainly got to switch them on more into feeding.

The conditions are much better this morning and yet again no action overnight. I’m really hoping for a daytime take. The rain is due to fade away, but the wind is due to continue throughout the next 24 hours, however, the wind will switch around to the west in the early hours of Saturday morning. I’m not planning on touching the rods until later this afternoon and I may well leave the long rod alone.

After spotting a nice carp show along the far margins and then noticing a van was parked behind that swim heading down the track. I quickly popped into the next swim and sure enough, he had packed up. So, without hesitation, I reeled in, grabbed a bucket or two, quickly drove around there, dropped them off, headed back to my swim to pack up ASAP, and was soon over there. All set up by 1 pm.

I hope this change of swim brings me some luck. I’m glad I slept well last night, as I’m fishing down the margins, but never to close these days.

12 wraps and no more is my limit, in fact, I’m only doing 9 wraps today, none of these 18 wraps rubbish that some people do. I think it’s crazy putting fish welfare last over the must-catch attitude, which is about these days.

The weather is perfect and there is the prospect of the pressure dropping, this must switch them on, it’s also due to rising up again on Sunday, this has to be the perfect window. However, an Otter has been spotted this past week and that will certainly freak the carp out. This must be why they appear to be in and around the snags. Unfortunately, no fence here, and there never will be, but that’s another story.

As I’m not sure how much bait the guy before me put out, so I’m simply sticking to single hook bait tonight, I hope of picking up any carp cruising by.

I’m up early after yet another uneventful night. I heard a fair few carp crashing last night, mostly along the margins, but the odd one in open water and even a couple to my right. In reality, they are mostly to my left along the margins and out on open water, it’s not over yet, but it’s been hard going getting this far and with a move in the mix, they just aren’t playing ball. A change in tactics will be needed on my next trip and it’s definitely going to be a Thursday night set up or even a Friday afternoon, I’m sure there’s a parents evening coming up at school.

It’s amazing as there are only really 5 more long sessions left until next year, I take the Christmas holidays off with the kids and come back in the New Year. Let’s hope we get back and aren’t put into lockdown again, don’t think we will but you never know.

It will be nice to start another year and move on to a more normal(ish) life – as long as these price rises stop and head back down at some point soon. Someone’s making a lot of money out of this nonsense.

I may even look for alternative winter water for next year or the one after, it would have to be very similar to this syndicate. Something to mull over.

It’s just so dead, I’m thinking of heading home a few hours early, the family will certainly appreciate that.

I decided that it was time to head home at just after 8 am. It was very clear the fish were tucked away hiding somewhere and I needed a bit of a rethink for my next trip. 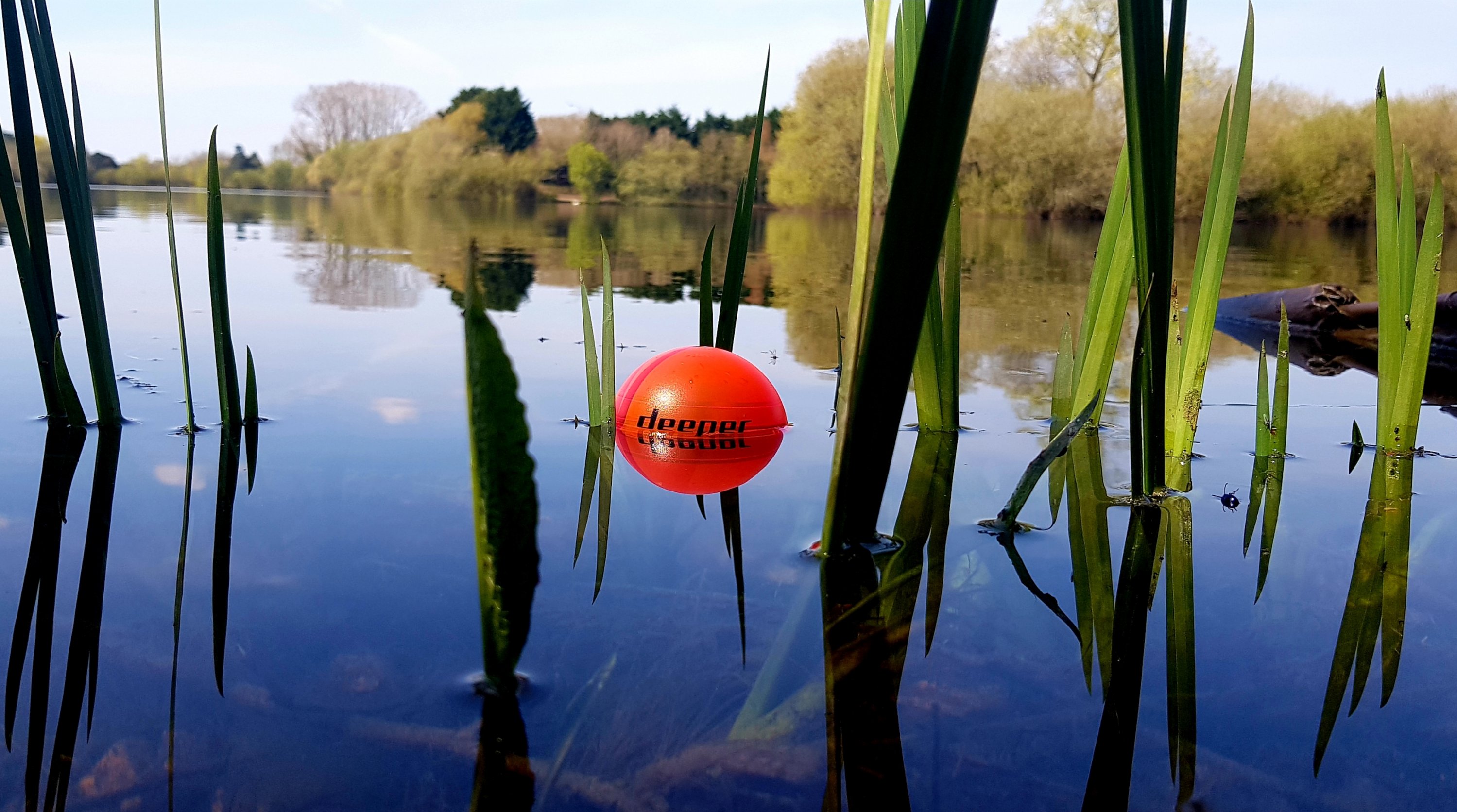 Use my code for 5% discount

The discount code applies to the entire order when purchasing the Deeper Sonars PRO, PRO+, PRO+ 2, CHIRP, CHIRP+, CHIRP 2, CHIRP+ 2. The code is valid in all countries.

I would like to give a brief snap shot of my life and introduce myself; My name is Richard Handel and was born in 1965 in Suffolk. I have worked as a UK Operation & Intermodule Manager for a shipping company. I live in Hampshire now and am married with 2 young children, both girls so I am a bit outnumbered even the cat is a girl! I have been fishing since I was about 7 years old. I started on small local rivers in Suffolk, then moved onto gravel pits and then carp fishing. My personal best is a 39.08 mirror, over recent years I have started river fishing again, on the Hampshire Avon, this is a nice break from the carp lakes. My life has turned a big corner this year, the company I was working for relocated their Operation centre to Estonia. I was offered a job at the head office in London. This would have meant a 5 day commute and working in Stratford. As a family, we did not fancy this, as I would hardly spend any time with the children (and the Mrs). So after 22.5 years, I was given a nice redundancy package and with my wife is working full time. I became the house husband. This has meant a complete turn around in my fishing, as I can pick and choose when I go. I have found a splendid new syndicate to fish this year, which includes 5 lakes and some 8 miles of river with only 150 members. It's an amazing change to the way I am able to fish. I am now trying to start my own tackle business and make a bit of a name for myself in the world of fishing, as I have retired from real work. Richard
View all posts by richardhandel →
This entry was posted in Carp fishing and tagged #SpottedFin #thecatalyst #fooddips #teamfin #assofishingline #fishspy #richardhandel #photography #jointherevolution. Bookmark the permalink.