Posted on November 15, 2020 by richardhandel

It’s my last few nights on the Airfield Lake, Ian and I have been planning this trip all summer.  We’ve been working out what we think is the best location to catch one of the big girls.  For the first time ever this year, we have been allowed to fish this lake until the end of Oct when it closes for winter.

We picked on a part of the lake we have been alternating between (which are 2 swims on opposite sides of the lake).  We have come to the conclusion that this gave us the best chances.  We have been able to get the swims regularly, to learn and understand more about the carp’s behaviour.

We were going to start the week in the double gravel swim and then move on if we felt the need.  We came to the conclusion that if we didn’t start here, there would be a good chance that the swim would get taken before we had done a few nights in the other area and leaving us stuck there or, without a go swim to move into.

I had found out from a fellow member that there were only 4 other’s on the complex and the gravel swim was free.  As always the night before a session I couldn’t sleep and was up by 6 am, which as the clocks had changed was 5 am, I was down the lake by 7 am (first light).  I dumped the kit in the swim as two carp crashed out, that will do.

I quickly got the bivvy up, as there was heavy rain showers forecast and boy, they were not wrong.  The bivvy was up and I was stuck in the car, before I could even get the second trip done!

After seeing the fish, I opted for single hook baits until later on this afternoon when I would get my spomb mixture out there.  I threw about 10 boilies of CC over each as a bit of attraction and finished off trying to set up in between more showers.

I very much hoping that the rain we’ve had over the past 24 hours have not put them off.  There was certainly a lot of water going in the lake and will be (more) over this week, but that’s fishing and I will certainly be working hard to bag a few lumps.

Past with no action, but I was slightly expecting that.  This is something that often happens here, today’s weather with help settle things down, the air pressure is low and the wind is from the south west.  We just need rain showers and not the constant down pours, overcast conditions will certainly help the prospects and will aid the chances of a few carp.

At 1300 hours (1400 old time) we spombed out some more bait and put fresh hook baits on. I had a walkabout to see who was about.

Went by without any action.  This is staying to look a bit like my last trip – extremely hard going and I only just about managed a carp.  This is a bit frustrating, we’ve seen and heard plenty, the conditions are good, they are just not picking the baits up.  I was hoping there would be less natural food and they would get on the my baits.  The forecast is for an overcast day and light rain until the afternoon.  The wind is picking up again from the south and move to the west.  Perfect conditions for this swim.  With 3 nights to go, I’m going to be getting my thinking cap on and switching around hook baits, I don’t believe there is a need to look at moving swims, well, not yet anyway.

After two nights of no action and clear signs the carp were about, it was time to adjust the position of one of my rods.  With a quick flick about to my right, I soon found the spot I’d located on the Deeper lakebook page.  I spombed out 6 small loads and put on a fresh CC wafter.  All I did with the baited area rod was to add a PPS to make my CC wafter into a snowman style set up and put that back out over the baited area which was slowly building up.  My confidence was boosted by seeing a few carp showing not far away, but still in the sanctuary area.

Just after 1930, the left rod burst into life.  I rushed out of the bivvy and pulled into thin air!  Great one of those takes, just what you need after 2 night’s blanking, but I suppose it’s an improvement on silent buzzers.  I soon had the rod back on the mark. 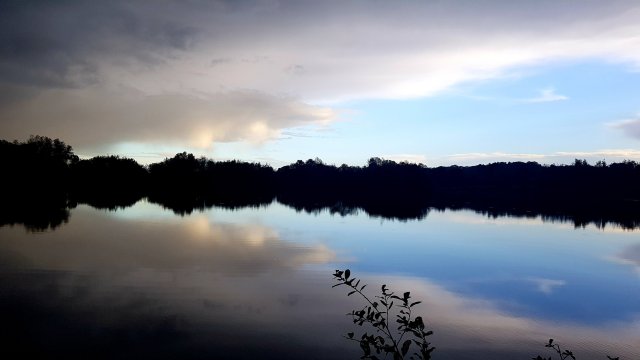 No further action was had overnight and I was up early to put fresh baits on.  I will try something different for the day.  I’m not planning of moving swim as I believe I’m in the best area.  I’ve seen some good carp and moving would only take me further away from the fish.

Just after noon on Wednesday, I set about locating and fine tuning my spots.  I topped up the area with a few more spombs, but less than the past few days.  It was definitely time to slow that down until the area started to produce more takes, we shall see how tonight goes.  I’m still very confident in the area we’ve chosen will produce the goods.

Just after 1800 hours, Ian and I where sitting outside have a glass and his right hand rod gave a couple of bleeps.  No, that wasn’t wind blowing giving the odd false beep.  The next moment, the rod ripped off and he was in to what felt and looked like a good fish.  He slowly pumped the fish in, I did the honours with the net and got the first look.

Oh, that looks like a 30+!  I had had to step up out of the lake onto the bank and you just know when you lift that net it’s a good weight.

We were both overjoyed with his success and it had certainly been hard going this week.

Just after 2000 hours, my right rod was away and into a carp finally!  The battle was pretty straight forward, apart from a boot full of water when I netted it.

11 pounder, but I was over the moon not to have blanked.

The rest of the night was bleep free, the rain arrived in the early hours and was due to stop, some time around mid morning.

The day was mostly overcast and drizzly, absolutely awesome conditions, but there where no signs of carp anywhere.  I baited up just after 1400 hours for the last night and got the rods out perfectly.  I’m filled with much anticipation and some sadness that is my last night on here until next March.  It’s time to move on to Meadow Lake, which gives me a bit of anxiety, due to Covid.  There will be more anglers and through traffic to the river car park.  I am just going to have to find my way around this and enjoy another winter on there.

As was the case with this trip, the night past bleep free.  There was a huge storm blowing through with strong winds and rain, you would think this would wake the carp up, but nope.  October has been a learning curve, certainly this trip and the one before, it has shown how you think it would go, differs to how it did actually go.  I will be back next year doing the same thing in October and we will see, where that takes us.

I had a brilliant 5 nights; Ian and I have had a few laughs and worked hard not to blank.  I’ll move on to Meadow Lake and day’s on the School Lake over the winter.  Ian will be pike fishing and may well visit occasionally over the coming 5 months.  We shall see how things work out.  I’ve enjoyed my season on the Airfield Lake and had my best one for some years with a total of 54 carp.  Unfortunately, for the first time no 30s but close with the 29lb 6oz Common and I’m convinced I has lost 2 that may have turn the scales over 30.  It’s quite nice to end the season with a long session and it means that I will be able to fish 5 on Meadow and 7 on here each year.  However, you never know what’s around the corner, especial in this day and age of these strange times.

I would like to give a brief snap shot of my life and introduce myself; My name is Richard Handel and was born in 1965 in Suffolk. I have worked as a UK Operation & Intermodule Manager for a shipping company. I live in Hampshire now and am married with 2 young children, both girls so I am a bit outnumbered even the cat is a girl! I have been fishing since I was about 7 years old. I started on small local rivers in Suffolk, then moved onto gravel pits and then carp fishing. My personal best is a 39.08 mirror, over recent years I have started river fishing again, on the Hampshire Avon, this is a nice break from the carp lakes. My life has turned a big corner this year, the company I was working for relocated their Operation centre to Estonia. I was offered a job at the head office in London. This would have meant a 5 day commute and working in Stratford. As a family, we did not fancy this, as I would hardly spend any time with the children (and the Mrs). So after 22.5 years, I was given a nice redundancy package and with my wife is working full time. I became the house husband. This has meant a complete turn around in my fishing, as I can pick and choose when I go. I have found a splendid new syndicate to fish this year, which includes 5 lakes and some 8 miles of river with only 150 members. It's an amazing change to the way I am able to fish. I am now trying to start my own tackle business and make a bit of a name for myself in the world of fishing, as I have retired from real work. Richard
View all posts by richardhandel →
This entry was posted in Asso Fishing Line, carp, Carp fishing, Carp Tackle Supplies, Classic Corn, Deeper Chirp, Delkim Buzzers, evolution carp tackle, Finskin, GoPro Hero 4 Black Edition, Grizzyman Clothing, JRC bIVVY, photography, ridgemonkey, Ronnie Rig, Scruffy Carp Leads, SHIMANO ULTEGRA, solu-ties, Spotted Fin, Spotted Fin Coarse, Spotted Fin Match Range, Submerge Clothing, summit tackle, Syndicate Fishing, Talking Carp Magazine, The Catalyst, ULTRGRA 14000 REELS, weather reports and tagged #SpottedFin #assofishinglines #deepersonaruk #evolutioncarptackle #grizzymanclothing #leaddontfollow #fishangler #Classiccornboilies #scuffyleads #hampshirecarpfishing #catalyst #carpfishing #talkingc. Bookmark the permalink.