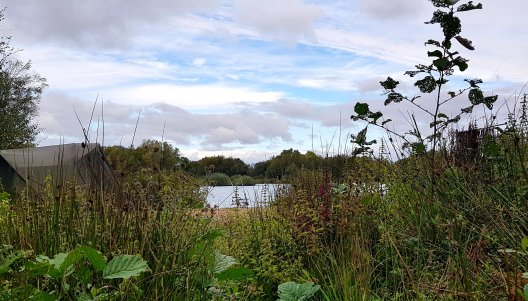 For this week, we’ve decided to head back over the others side of the lake and fish on the side of the wind.  It’s due to swing around to the north west and hopefully it’ll drag some of the carp out of the sanctuary area into the main body of the lake.  The only flaw in our plan could be the big south westerly that is due to pick up a blow all night long, it should swing to the NW by noontime.  As long as the carp haven’t been pushed into the opposite side of the lake and decide to stay.  The weather front did come with a lot of rain and I’ve found that the carp don’t like this on here.  So, I’m hoping they stay in the sanctuary until this afternoon and then my swim will have settled down after the 5 kilo of bait I stuck out.

Ian had pitch up to the right of me, unfortunately he arrived just before the last of the rain pushed through, he was lucky and got his bivvy up before it started to rain.

It was a bleep free in my swim all night, the lake had been flat calm and starry.  I did hear the odd fish crashing about.  The pressure had gone up considerably and I felt that I needed the wind back, a spot of rain would help.  This was forecast to happen later on this afternoon; it was going to be sunny and clear sky’s until then.  This was not giving me much confidence for a morning take, but as we’ve not fished in October before, you can’t really tell how the season change has effected them.  I didn’t fish this lake last year at this time of year, as I had moved off way before now to the Meadow Lake.

Over the past couple of weeks I’ve felt that daylight takes were more possible, fingers crossed for one this morning. 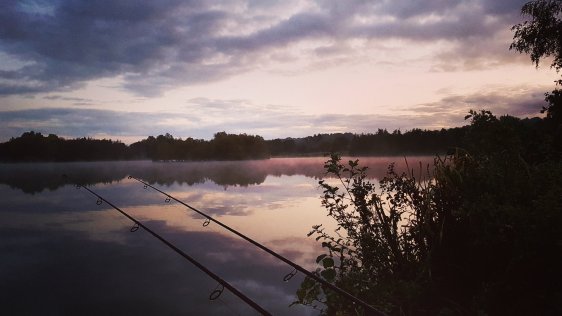 I changed over to fresh hook baits just after 11am as there was a couple of hours worth of rain coming.  I felt there could be a chance of a take after it had passed, I would then bait up for the night.  The rain arrived just after 1pm and slowed down just after 3pm.  My first take happened just after 3.30 to my left hand rod and after a straight forward fight (this swim is so much easier than last weeks), the carp was in the net.

Perfect start and with the snaps done, its was soon back in the lake.  With a fresh bait on, it was the perfect time to top the swim up with more bait.

The second take was well into dark at 21.45, the right rod ripped off with another lovely looking Airfield Common. 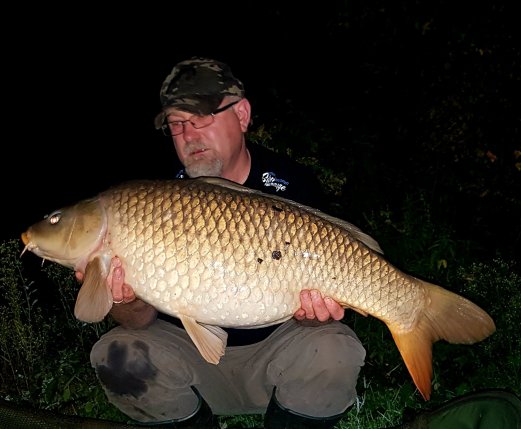 Lucky for me it was another straight forward fight into the Nsr50.  With the snaps done, the fish was back home and the rod was back on the spot.

The next take was moments after I had typed the above paragraph!  The left rod slowly pulled away out into open water and after some persuasion, it was coming my way.  It had a close call with the line on the other rod, but I was soon playing the carp out under the rod tip and soon slipped it into the waiting net. 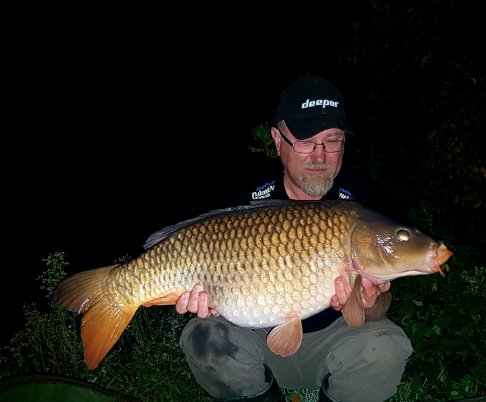 That was nice going and the rod was back out.  It was time for a brew and then get my head down, that was it for the night and a lovely sunrise again over the forest with a mackerel sky. 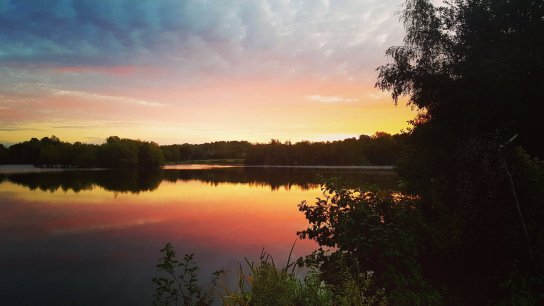 A couple more anglers turned up this morning, which is nice to see and will help get the bait into the lake.  The wind is from the NW today and it’s a gentle breeze but it’s overcast, which hopefully these conditions will bring a daytime take or two.  I’m going to top up the swim just after lunchtime and hopefully produce another afternoon take.

The last night passed without a single bleep.  I’m sitting waiting for another amazing sunrise over the forest and hoping for an early morning take.  This would make it my 100th carp of the year.  However, we haven’t had any morning takes this trip between Ian and myself, so I think it will be very unlikely, but you never know with this carp fishing game.

It will be good to pack up in the dry on a lovely sunny morning.

I would like to give a brief snap shot of my life and introduce myself; My name is Richard Handel and was born in 1965 in Suffolk. I have worked as a UK Operation & Intermodule Manager for a shipping company. I live in Hampshire now and am married with 2 young children, both girls so I am a bit outnumbered even the cat is a girl! I have been fishing since I was about 7 years old. I started on small local rivers in Suffolk, then moved onto gravel pits and then carp fishing. My personal best is a 39.08 mirror, over recent years I have started river fishing again, on the Hampshire Avon, this is a nice break from the carp lakes. My life has turned a big corner this year, the company I was working for relocated their Operation centre to Estonia. I was offered a job at the head office in London. This would have meant a 5 day commute and working in Stratford. As a family, we did not fancy this, as I would hardly spend any time with the children (and the Mrs). So after 22.5 years, I was given a nice redundancy package and with my wife is working full time. I became the house husband. This has meant a complete turn around in my fishing, as I can pick and choose when I go. I have found a splendid new syndicate to fish this year, which includes 5 lakes and some 8 miles of river with only 150 members. It's an amazing change to the way I am able to fish. I am now trying to start my own tackle business and make a bit of a name for myself in the world of fishing, as I have retired from real work. Richard
View all posts by richardhandel →
This entry was posted in Asso Fishing Line, Carp fishing, Classic Corn, Deeper Chirp, evolution carp tackle, Finskin, Grizzyman Clothing, Pink Pepper Squid, Ronnie Rig, Scruffy Carp Leads, SHIMANO ULTEGRA, Spotted Fin, Spotted Fin Coarse, Spotted Fin Match Range, Submerge Clothing, summit tackle, Syndicate Fishing, Talking Carp Magazine, The Catalyst and tagged #SpottedFin #assofishinglines #deepersonaruk #evolutioncarptackle #grizzymanclothing #leaddontfollow #fishangler #Classiccornboilies #scuffyleads #hampshirecarpfishing #catalyst #carpfishing #talkingc. Bookmark the permalink.