I am out on the Airfield lake for three nights this trip.  After a good look round and with no one else on the lake, it was a bit of a hard choice.  I picked the bank which had the warm north wind blowing hard on to it.  The water was colored up nicely and there were quite a few carp topping, which is a very good sign. 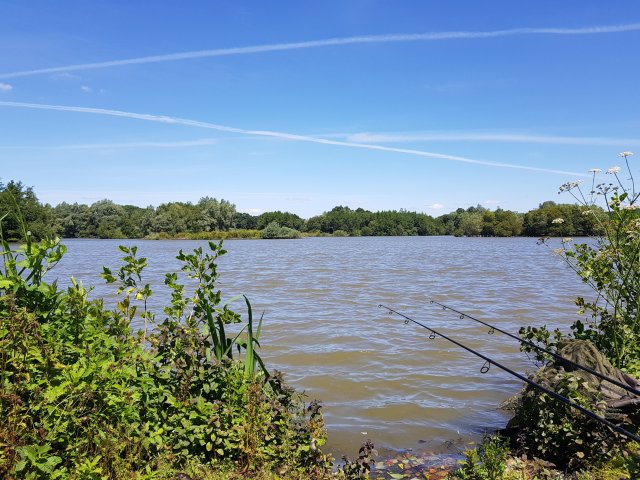 I found a perfect spot with my Deeper (which I have fished before) and it has produced a few nice fish in the past for me.

I baited this spot with 10 balls of ground bait which I had made up in the week for this trip.  It is a mixture of Spotted Fin Frozen Krill, micro Pellets, G02 groundbait,  a load of liquids and topped the swim up with 4 Spombs of Catalyst Boilies soaked in Minaminos. 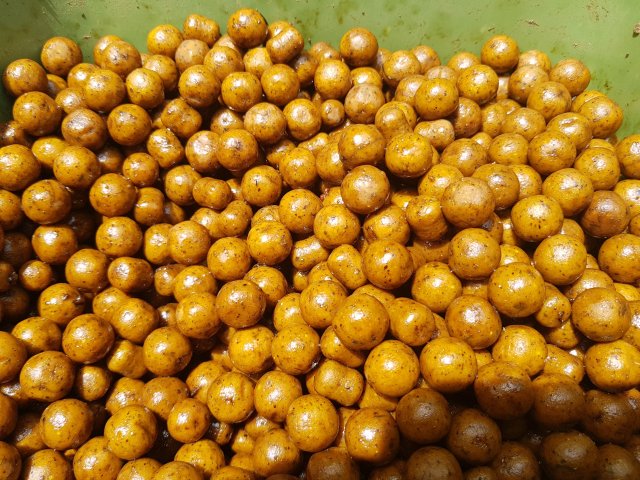 The other rod was going to be moved around different spots over the next few days.  The first being the corner of the island, all around had been baited with 15mm Catalyst Wafters.  I have found this work well on here.

As dawn rose over the lake, I was up early to recast my island rod.  The wind had finally dropped and I could get an extra few feet closer.  This made no difference as I was still happily camping and not catching, it was the same for Ian as well, a bit shocking as we had seen and heard more fish activity than previous trips out.  By noon, we decided to relocate at least one rod each into a different spot and we spend over an hour mapping out swims a bit more with the Deeper.

And found some pukka spots (hopefully may bag us a fish each).  My left-hand rod was moved along the margins just off an overhanging tree.

But not to close, as these fish will be in there before you blink.

Well, that takes the biscuit!  I’ve waited two days for a take, knowing I was in the right area and I get a dam hook pull – not happy.  You all know that feeling and it does happen to us all from time to time.  My season is not going well this year and that doesn’t help things.

The rod was recast, it’s time to move on and work hard for the next take – hopefully, it won’t be too long away.

As the last night and day look like is going to be a hot one, I have discided it may be worth trying out a zig rig on one rod.  Not sure as it’s only 6ft deep where I am fishing.  More of a 4ft pop-up, which is something we did back in the 80s when the bird life drove you crazy.  We would put a pataoster style pike rig out with a dog biscuit and fish a foot under the surface.

The rod was moved closer to the overhanging tree with a few balls of ground bait and a large bag of SF mix pellets, that I had put together.

Ian was also still blanking, which was a total shock, after the features and signs of fish on an area to the right of him.  This lake is certainly proving hard going at the moment.

Well folks, the third night passed by with not a touch and as my trip nears its end, my talley is just one lost fish.  This is certainly pretty rubbish and I continue my run of sporadic catching, which is all part of the joy and sorrow of carp fishing.  But where else would I be?  With such pleasant surroundings and great company, which keeps me coming back for more, after that unknown monster carp, which from time to time we see out there in the lake.  One day it will grace my net and all the past will be washed away.

There is always a next time.

With the kit all in the car and the lake completely empty, there was no better chance to get the Deeper out in some areas I had yet to map out.  Much to my and Ian’s surprise there were loads of fish in front of both swims.

Unfortunately, he had to be off and I was able to stay for a couple of hours before the family were due home.

I spent an hour in this swim with only seeing a couple of small fish, which despite my need to catch a carp, they were not for me.

I then moved on to the next one for the last hours and flicked two bags out, filled with mixed pellets and a few Catalyst Boilies.  I sat in the shade which was lovely, as the heat of the day was certainly upon us now, not the best time to catch but I was forever hopefull and you just never know.

I would like to give a brief snap shot of my life and introduce myself; My name is Richard Handel and was born in 1965 in Suffolk. I have worked as a UK Operation & Intermodule Manager for a shipping company. I live in Hampshire now and am married with 2 young children, both girls so I am a bit outnumbered even the cat is a girl! I have been fishing since I was about 7 years old. I started on small local rivers in Suffolk, then moved onto gravel pits and then carp fishing. My personal best is a 39.08 mirror, over recent years I have started river fishing again, on the Hampshire Avon, this is a nice break from the carp lakes. My life has turned a big corner this year, the company I was working for relocated their Operation centre to Estonia. I was offered a job at the head office in London. This would have meant a 5 day commute and working in Stratford. As a family, we did not fancy this, as I would hardly spend any time with the children (and the Mrs). So after 22.5 years, I was given a nice redundancy package and with my wife is working full time. I became the house husband. This has meant a complete turn around in my fishing, as I can pick and choose when I go. I have found a splendid new syndicate to fish this year, which includes 5 lakes and some 8 miles of river with only 150 members. It's an amazing change to the way I am able to fish. I am now trying to start my own tackle business and make a bit of a name for myself in the world of fishing, as I have retired from real work. Richard
View all posts by richardhandel →
This entry was posted in Aqua M3 Compact Bivvy, Asso Fishing Line, big pit reels, big pits, carp, Carp fishing, Carp Tackle Supplies, Catalyst pellet, Course Fishing, Deeper Pro Plus, Delkim Buzzers, evolution carp tackle, Finygo, Fishing App, Fishing Video's, Frank Warwick, lake fishing, maggot cluster, NSR 50, photography, Pop Ups, richard handel, Ronnie Rig, SHIMANO, SHIMANO ULTEGRA, Smokey Jack, spomb, Spotted Fin, The Catalyst, ULTRGRA 14000 REELS and tagged #assofishinglines #carptacklesupplies #richardhandel, #assofishinglines #richardhandel #SpottedFin #thecatalyst #jointherevolution #carpytalkmag #Catalystboilies #catalystpellets #jointherevolution #Catalystboilies #catalystpellets #jointherevolution #Ca, #Carpfishing #chrisyates, #spottedfin, Carp, evolutioncarptackle, nsr50. Bookmark the permalink.