My Quest For A Big Common Part 1 to 4

Posted on December 25, 2014 by richardhandel

It’s November now and my new syndicate has closed for the Winter (from the 30th September),  it’s a SSSI, say no more.

I have only had one small carp on the river this year, dispite seeing a nice Common.

It’s now time to get back on my small syndicate, which is closer to my work again.  Hopefully, I will get to odd lunch free and be able to bait up again like last year.

Stunning little place this is.

I am hoping this winter is much better than the last, I got well fed up with the muddy, boggy track and all that rain.
I am hoping to get two months of fishing in, before the Winter sets in.  As I get older, I for find fishing nights in the Winter much harder. This is due to setting up and packing up in the dark, I also hate to carry bucket loads of stuff for one night.

I have also got a trip planned to fish Holbrook mill pond again with Rob.  There is a nice common in there and this would for fill my dreams of landing a 30+ Common.

I am quite looking forward to this winter as the past few have been very bad.

Well…my quest for a nice big Common has moved on to another year.  Unlike the past two years, where I concentrated on one water.  I have come to the opinion, that I was not getting anywhere.  I therefore will give myself a couple more waters to try.  As I have now moved on to my new syndicate for the next 6 months (until it closes for winter and a revamp).

I will be mostly here.  I will keep walking round my local syndicate water in my lunch hour’s, you never know I am always hoping that I spot the fish and prebait an area!

I have also still got the river option and I have not seen any sizeable carp.  However, when I was doing a night once I did hear the most amazing fish crash.  You know the type, it sounded like someone had thrown a cow in!

I am hoping that with a great deal of looking, there is a chance I will achieve this goal this year.  I also feel that after the last few years more options are better than one. 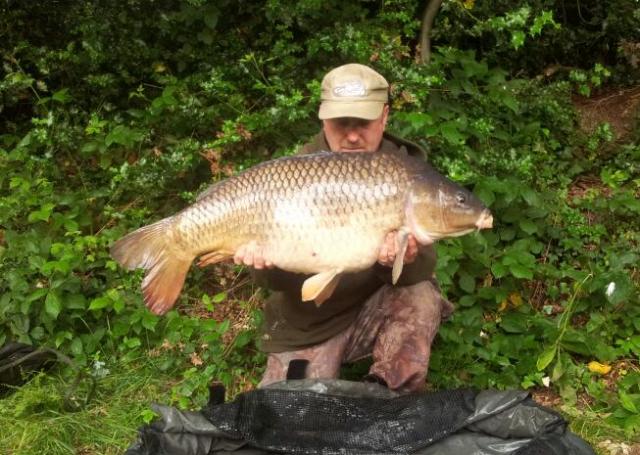 I will keep you posted
Richard

Unfortunately, due to work and family stuff this year, I have had to cut back on the number of tickets that I have. And settle for one water to fish, being the Reservoir.  It holds some nice fish and also a big common in it. After what seemed a life time, I finally managed to get my first big common. 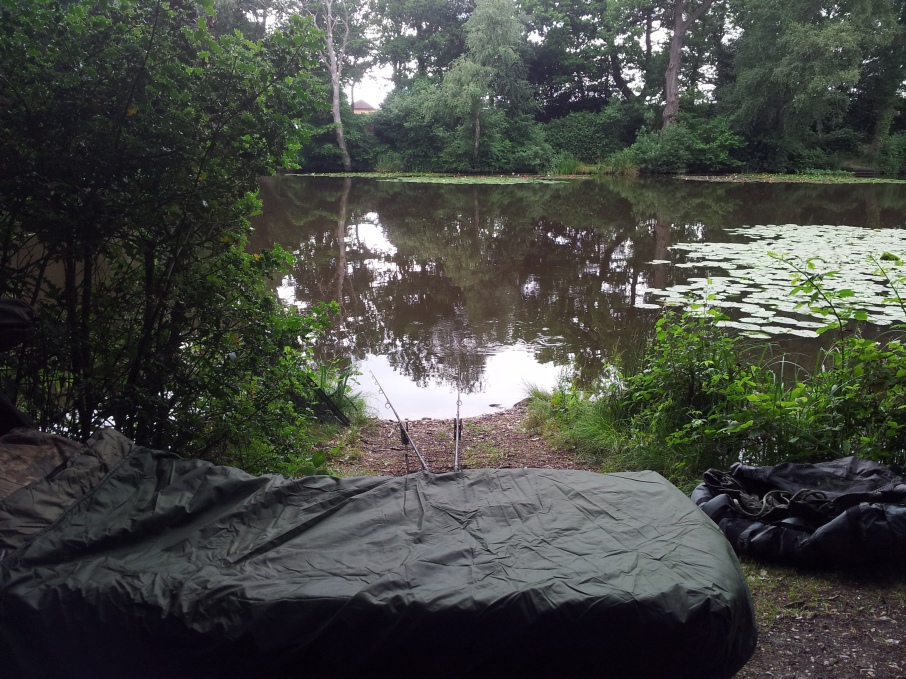 I have settled for a swim down the deeper end of the lake. As on the way up the track, I spoke to another member on his way home from a two night blank. However, he did hear fish in the night crashing down this end.

I have put the bait under an overhanging tree branch in 3ft of water, along the margin with some Gulp Baits Tiger Nuts.

I am a bit spoilt for choice here, with pads down the margin and across the other side or even open water. I decided to put it over the far side and if I saw any signs of Mr Carp before night fall I could move it. 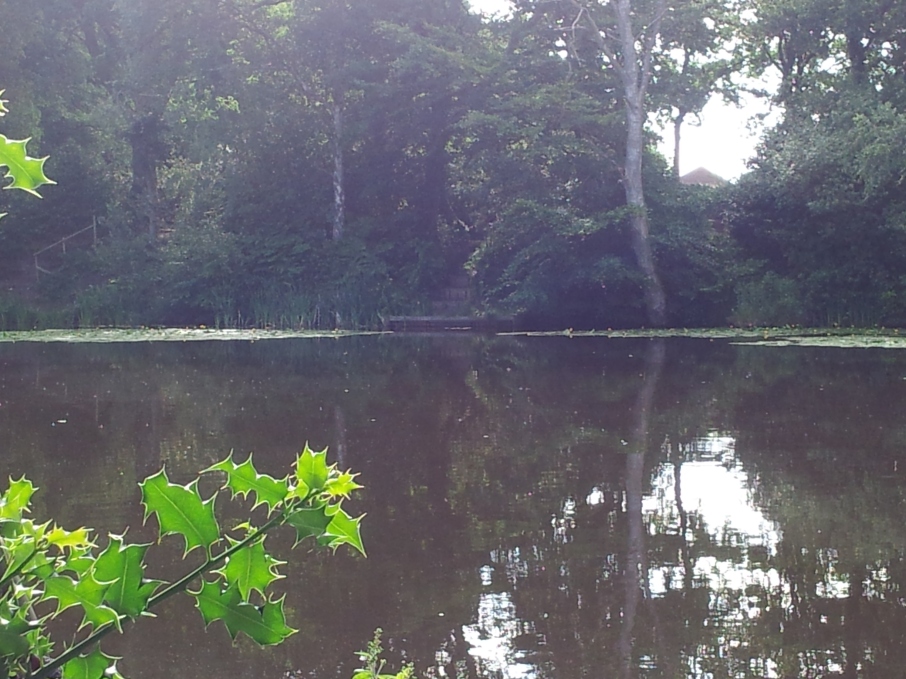 At around 9pm, a nice fish rolled by a large set of pads on the far bank. My best bet was to reel in the margin and cast it over there. 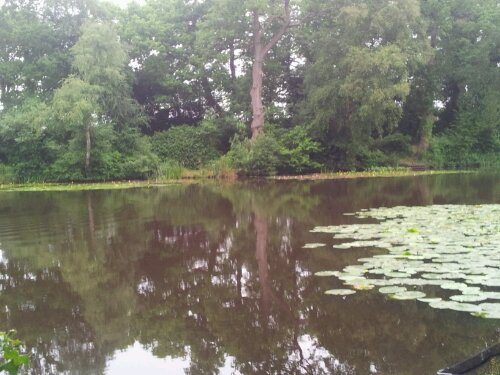 I had put some Gulp Baits Red Crustacean boilies in a bottle of dip last year to harden them up and to soak. I thought I would give one a go, I also made up a small pva bag, as I was not going to put any freebies out.

At 6am, I had a couple of beeps and opened my eyes to see the tip bending round.  I pulled into a nice fish, who at the time it was heading for the pads.  So I had no other option, but to hold on until it turned, after 10 minutes or so it was safely in the net and I breathed a sigh of re-leaf.  I knew it was going to be a good fish, as it was a plodder and when it rolled into the net I knew I had a nice big common and a new PB.  It was not quite the 30+ , but I was still over the moon with a 28lb 12oz fish .

I going to start a Quest to catch a 30+ Common Carp this year and will update my blog each week with my explots.  I would like to introduce you to one of the lakes, it’s in fact, a match lake but it has some very large Common Carp to near the 40lb mark.  As I do all my fishing during the weekdays, it keeps me away from the weekends; I normally do 2 x 12hrs nights a week.  And as we are still in the grips of Winter, there will be no matches or other anglers on the lake until late spring time. The lake is about 8 acres but in a horseshoe shape, there are swims all round the lake with the acceptation of about 100m.

In the Summer time there are lilies everywhere and some reed beds with over hanging trees.  Which give the fish plenty of options to get away from Mr Fisherman.

Plenty of Over Hanging Trees & Pads

Unfortunately the is a large head of small carp to get though so the only option is to use 20mm double up boilies on a blowback rig.  It looks a bit crude but hopefully will save me from being terrorised by all the small fish, I need my sleep as I am up a 6am and off to work. 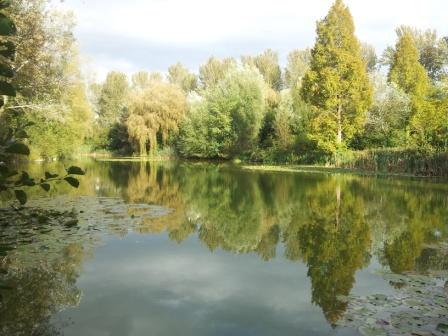 I am going to bait up with 12mm tuna & spice boilies which will hopefully attracted the small fish, this will in turn attracted the big fish, which will bully of the small ones off and bingo I get the big common!  Well that’s my plan for this winter. #carpfishing

I would like to give a brief snap shot of my life and introduce myself; My name is Richard Handel and was born in 1965 in Suffolk. I have worked as a UK Operation & Intermodule Manager for a shipping company. I live in Hampshire now and am married with 2 young children, both girls so I am a bit outnumbered even the cat is a girl! I have been fishing since I was about 7 years old. I started on small local rivers in Suffolk, then moved onto gravel pits and then carp fishing. My personal best is a 39.08 mirror, over recent years I have started river fishing again, on the Hampshire Avon, this is a nice break from the carp lakes. My life has turned a big corner this year, the company I was working for relocated their Operation centre to Estonia. I was offered a job at the head office in London. This would have meant a 5 day commute and working in Stratford. As a family, we did not fancy this, as I would hardly spend any time with the children (and the Mrs). So after 22.5 years, I was given a nice redundancy package and with my wife is working full time. I became the house husband. This has meant a complete turn around in my fishing, as I can pick and choose when I go. I have found a splendid new syndicate to fish this year, which includes 5 lakes and some 8 miles of river with only 150 members. It's an amazing change to the way I am able to fish. I am now trying to start my own tackle business and make a bit of a name for myself in the world of fishing, as I have retired from real work. Richard
View all posts by richardhandel →
This entry was posted in Avon rods, Bag Fishing, big pits, Brollys, carp, Carp fishing, CENTURY RODS, CHILLI HEMP, Chub Fishing, Course Fishing, Dead Baits, Defiant MPS, Delkim Buzzers, Diawa, Fishing, Fishing Video's, Fishing Viedi's, Florocarbon Line, Food, Fox Tackle, Gulp Baits, Hampshire Avon, harefield, harefield lake, HEMP, Holbook, Holbrook Mill Pond, infusion baits, john wilson rods, JRC Tackle, Korda Tackle, lake fishing, matt Hayes, Nash Tackle, Paul Selman, pike, Pike fishing, Pop Ups, River Avon, river level, Rob Nunn, SHIMANO, SHIMANO TACKLE, SHIMANO ULTEGRA, Simon Crow, Solor Tackle, SP RODS, spods, spomd, Steve Neville buzzers, Thermos, Tiger Nuts, trakker pioneer, trakker tackle, ULTRGRA 14000 REELS, Uncategorized, weather, weather reports, Zig Bugs and tagged Hampshire Avon, infusion baits, korda tackle, lake fishing. Bookmark the permalink.